When I think of Metroidvanias, I think of dark, gritty locations brimming with monsters or aliens (or both), with moody, foreboding music that all comes together to invoke feelings of hopeless desolation. Iconocasts is not that game. It's bright, vibrant and alive, with a powerful story that's masterfully told. Dust off your wrench and charge up your stun gun, because you're in for an amazing adventure.

Iconoclasts follows the story of a young girl named Robin, who is an unlicensed Mechanic, operating illegally to help her fellow man. Unfortunately for Robin, this is an extremely dangerous thing to be. In the world of Iconoclasts, everything is run by the Church, and operating outside of the church's influence or without their permission gets you hunted down and branded a Sinner, with deadly consequences.

Owning tools without permission is considered a sin, and those who break the rules get completely wrecked. The church's reach goes deep, and they have a deity on their side; they worship the "Mother", who lives in the fabled City One. 'Mother' prays to 'Him' for safety and guidance for the rest of humanity, and “Mother” doesn’t like sinners, which is unfortunate for you, since your secondary method of survival is using a wrench to help people. You are a walking, talking, sinning heretic, making you a target and a danger to everyone around you, just for fixing people's stuff.

As I said, charming.

Iconoclasts is a Metroidvania, through and through. There’s tons of exploration, puzzle solving, and a lot of jumping and shooting. Robin starts with a stun gun that has a somewhat basic charge up and power blast mechanic to it, and although you'll get upgrades and alternate methods of fire throughout the game, the stun gun was my primary method of ranged attack for the bulk of my playthrough. There isn't omnidirectional fire, just the standard up, down, left, right, but if there is an enemy within range, you will semi-auto aim in their general direction, which is a help in combat. Your secondary attack is your big Mechanic's Wrench, a massive piece of metal that you use to melee enemies and deflect projectiles, in addition to solving puzzles and fixing things.

You also have Minor Tweaks that you can craft to aid you in your journey. These are small things, like moving faster, extending the amount of time you can spend underwater, and so on. These tweaks don’t make a massive impact on the gameplay, but they are welcome additions, and acquiring them will only make you more determined to find all the hidden loot and secret areas to improve your tweaks.

Movement is fluid and the platforming is solid. The game really encourages you to explore everywhere, and there never seems to be any wasted space. Another place the game absolutely shines is the writing; it’s some of the best I've ever seen, hands down. I've rarely played a game where even small bits of dialogue and subtle character quirks have affected me so strongly. Some of the conflict in this game almost feels too real, and that's amazing to see in a game like this. Iconoclasts focuses on story first, and although it sounds counter-intuitive for a Metroidvania, it pays off in a big way.

The art style is a beautifully pixelated display, brimming with color and variety, and each area/zone of this game feels unique and alive, or in some cases purposefully dead, and the result is really something. This feels like a living, breathing world. The music is also extremely well done; it's catchy, sets the mood perfectly, and is just generally pleasant to listen to. I never felt that things got too repetitive or stale.

Iconoclasts does what many games try to do and fail, even AAA titles; it tells an engaging story that feels REAL. Experiencing this game for it's story is worth the price of admission alone, and when you throw in great gameplay and stunning visuals, you're in for the best platformer I've played this year. 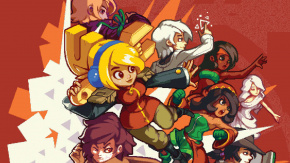