Rad Rodgers is a throwback to a simpler time in gaming (i.e., the 90's), where environmental hazards, platforms and simplistic, but difficult enemies stood in the way of collecting the most crystals, coins and baubles. You run and jump right to left (and sometimes even left to right) in this 2D side scroller, finding secret areas, navigating obstacles and picking up weapon upgrades, in addition to blasting the hell out of everything, while your foul-mouthed, robotic, video game console companion rides on your back, smashing what you tell him to smash with his steel arms.

The plot, much like those of the games Rad Rodgers emulates, is a simple one; you are a young kid who doesn't want to go to bed and just wants to play video games. Rad Rodgers has an older console (in this case, named Dusty), who, after you fall asleep in the midst of a gaming marathon, begins to act up, glowing and freaking out, sucking you into the console. When you awaken, you find that you've been teleported inside a game, and you are the main character. Armed with a blaster, Dusty's offensive quips and your wits, you venture forth, trying to figure out what the hell you are supposed to be doing in this new (yet quite familiar) world.

You make your way through the game's stages, shooting everything that moves, collecting crystals and keeping an eye on your health bar. The gameplay is nothing you haven't seen before, albeit with updated graphics. There are Mega Man style jumps to make and enemies to kill, platforms that move and disappear, toxic waters to avoid and enemy patterns to figure out. The action is occasionally interrupted by a Dusty segment; digital rips in reality that lead to "The Pixelverse", which I found to be underdeveloped and often, irritating.

Free from Rad Rodgers' back, you fly around the Pixelverse as Dusty, avoiding lasers, bouncing balls of energy and other obstacles, in what amounts to a moving version of the board game "Operation", where you lose health if you touch the sides of the level, the energy balls, or really, anything at all. You'll find your target, then hold a button or punch it until you are beamed back to the real world, your mission completed. While these do offer some welcome breaks from the enjoyable, but at times monotonous action, the segments themselves just aren't that fun, and a lack of brightness in the Pixelverse makes it tough to tell where you can freely travel and where you cannot.

Enemies on the whole are not very clever, often running straight at you, or posting up in annoying positions and taking pot-shots at you, calling to mind the NES version of Ninja Gaiden, where something just off screen can become a serious hassle that doesn't always seem fair. The combat is fun, but the enemy AI is noticeably lacking in intelligence, and although you can pick up gun upgrades, like stronger bullets and rapid fire, the gunplay just isn't as satisfying as it could be.

The graphics have a slick modern look to them, and they work well with the title. Backgrounds are often lush and colorful, and the enemies range from boring to detailed. The sound shines here, and like some of the best games of the era, the background music can (and will) get stuck in your head, making you hum it hours after you finished playing.

Overall, Rad Rodgers is fun but flawed. As a love letter to the games of the past, it works, but I wished there would have been more improvements to the old-school formula besides polished graphics and the often annoying Pixelverse 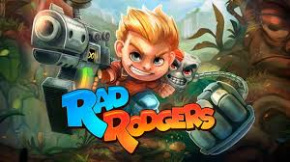