Severed exists in a weird, bright but moody world, where monsters await you in a series of labyrinth-style mazes hoping to shred you to pieces, unless you chop em up first. You traverse the branching map, using the 3DS stylus to hack monsters to chunks, upgrading your warrior as you go along with the game’s currency, which of course, are enemy limbs.

From the gate, you realize that you are in uncharted waters. You wake up, already injured, with no knowledge of where or who you are. Smoke lingers in the distance, so you know something serious went down, but what?

You make your way towards the smoke, rifling through the debris of what appears to be a small village, until you find a tall mirror, and with it, the plot. You realize that the chunk of health missing from your health bar coincides with a missing chunk of you; your arm. You enter a trance-like state, and recall scattered fragments of what came before, mainly your family, and something chopping off your limb. When you recover your faculties, there is a monster standing beside you, cryptically telling you that while this place looks like home, it most definitely is not. Tasked with finding your missing family, you take the sword he offers you and head out to get some answers.

Combat is mostly a joy in Severed. You have to attack your enemies in their vulnerable spots by slashing with the stylus on the touch pad. Long slashes do more damage but take longer to execute, while quick slashes can be doled out in a rush but inflict a fraction of the damage. Such a simple mechanic lends itself beautifully to the fights. The main factor in combat are the “sever” attacks, which can only be executed when you have a full focus bar. The focus bar fills when you successfully strike an enemy, but taking damage and being blocked disrupts your swings and lowers your focus. A floating icon tells you when your focus meter is full, and if you kill your enemy while in this state, he will freeze for a brief moment, allowing you to slice off its limbs as fast as you can, which you collect for upgrades. This can get very hectic when you are surrounded by enemies, rotating between them all to counter and attack, trying to keep an eye on everyone’s life-bar so you don’t accidentally kill a monster without full focus, which will still win you the battle but will also sacrifice those tasty limbs.

The map is represented on the top screen of the 3DS, and the bottom screen is where the combat takes place. The map system works well, and you can zoom and rotate the map to find those pesky secret areas and missed treasures. Unfortunately, it is easy to miss things while watching the first person POV screen, especially since you control like a tank and are unable to backpedal. This isn’t a huge deal, but I did spend most of my time exploring staring at the map, since you can (and will) often miss branching paths or corridors that you wouldn’t notice if you weren’t paying strict attention to the top screen.

Puzzles are simple fare for the most part, mainly hitting a switch here to open a door there, or rotating a tile to the “sun” side (which opens sun doors) or flipping it to the “moon” side to open moon doors. There is a good amount of barrel breaking and scavenging, with some backtracking for treasures once you gain new abilities.

New abilities mostly come in the form of magic, like the ability to steal enemy buffs, charge your sword strikes or use a flashbulb type effect that stuns enemies for a brief moment. These can feel rather tacked on until the game steadily raises the difficulty by throwing more and more enemies at you that require different means to take them down. Some enemies won’t show you a weak point until you attack first, others must be countered before you can hurt them. There is a good amount or variety to this rather simplistic combat system, and when you are watching multiple enemies’ “attack meters” fill while trying to max out your focus meter without taking a hit, the game is a hectic good time. There is also a skill tree that you can invest severed limbs in, which has a good amount of upgrades, like taking less damage or increasing the power of your long sword strikes. Upgrading the different skills requires different combinations of limbs, and I found myself backtracking to find certain monsters so I could finish upgrading a given skill.

The game designers are really onto something with the world they have built for Severed; everything is alien and strange, from the bizarre flora and fauna to the otherworldly monsters lurking around most corners. There is a definite Aztec lean to the art-style, and it works perfectly, giving you a vaguely familiar feeling in this unfamiliar world. It is unsettling and effective, and it made me eager to explore every inch of the map.

The sound is great as well, with moody pianos and uptempo beats for dangerous exploring and fights. The slashes and attack SFX are satisfying from the first swing to the last slice.

Severed makes great use of the 3DS touch/double screens and features addicting, rewarding gameplay and a creepy, interesting world to explore. 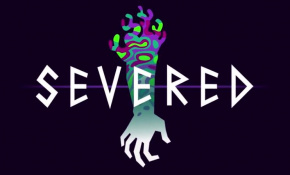