After the success of South Park: The Stick Of Truth, it was only a matter of time before the sequel arrived. On this go-around, Parker and Stone are focusing on superhero stuff instead of the Game Of Thrones/Dungeons & Dragons bend of the previous game to great effect, aping and mish-mashing various well-known comic heroes. If you played Stick of Truth, then you pretty much have played The Fractured But Hole, but that in no way is a dig on the title. This is a fun game, the combat has a few changes to keep things fresh, the humor is on point, and although the title won't sway anyone who isn't already a fan of the show, South Park lovers are in for a treat.

The story literally takes off where the previous game ended, with the final scene of Stick of Truth acting as the first scene of The Fractured But Whole. Cartman starts being a dick and decides that he wants to play superheroes instead of swords and shields, tanking the game the kids had put so much time into. The story revolves around an influx of missing cats from town, with Cartman forming a team to rescue the kitties, and of course, get famous, collect the $100 reward and be the best superheros in town, complete with imagined movie deals and merchandise rights. It's all a lot of Marvel vs. DC stuff, and comic book fans will love figuring out which kid is a mashup of which characters, with some obvious ones like Timmy as Professor X from the X-Men, and Jimmy becoming a Flash-ripoff-speedster called Fastpass.

You once again assume the role of the "New Kid", and you can customize and build your character to look how you want him to. You can also choose and change your power set, which is an interesting feature for an RPG. Most RPGs have you investing in certain powers and skills, enhancing your abilities to have stronger versions of the attacks you received at the beginning, but SP:TFBW gives players more options and customization than that, which is appreciated.  You start off with your one superhero power-set; there's a Cyclops-esque power set of primarily ranged attacks, an Incredible Thing style of powers that focuses on punches and slams and so on, but you can mix your four powers depending on your play-style. You also have slots that you can insert skill and stat boosting items into, and you can end up kind of taking a backseat to the other well-known kids from South Park, crafting your powers to suit the kids you are fighting alongside.

Speaking of the other kids, you can eventually get up to a dozen characters on your team to choose from, and you can fight with three allies at a time. Kyle is a human kite with ranged and healing abilities, Token is a hulking tank, Craig is an in your face punching-type brawler and so on. I found that it was easier to kind of tailor my New Kid to compliment the other kids, instead of the other way around to maximize our combat effectiveness. There are a few changes to the combat this time around, most notably the grid system. The grid system decides who can attack from where, and expertly lining up your enemies allows you to fire a laser blast through them all, or hit a group with a AOE attack.  Although nowhere near the tactical level of, say, Final Fantasy Tactics, the grid system forces you to think things through and plan a couple moves ahead for maximum damage.

There are a few other changes to the combat system, some good, some kind of whatever. One thing that slightly irritated me was the button presses when you take or dish out damage. When you are, say, charging up your laser, you'll have to rapidly press a button to charge it up to full power, while other moves have you tapping a button at just the right moment, or inputting a series of button taps to get your attack to do maximum possible damage. If you take damage, you will have a short window of time to hit a button, mitigate some of the damage, and build up your special meter. Once your meter is full, you can unleash a cinematic ultimate attack, which vary from hilarious to gross to tiring, the latter coming after you've seen a given ultimate attack cinematic for the two-hundredth time.

Speaking of hilarity, the game is obviously crammed with jokes, most of which land. Once again, your New Kid doesn't talk, playing more of a foil for the South Park characters you know and love, letting them to do their thing and make the usual jokes. Despite things playing out exactly how you expect (Cartman looking out for #1 and being an asshole, Stan trying to calm things down, poor jokes for Kenny and racist jokes for Token), if you like South Park, you will love what you find here. Mr. Mackey sits you down for a pretty humorous counselling session where you can pick your gender (there is obviously no wrong answer), you can upgrade and earn new powers from Morgan Freeman (who runs a Mexican food joint for some reason), solve the mystery of who is keying Randy's car and so on. There are a huge amount of background characters from the show who make appearances as side quests, and it all feels very South Park. Just like The Stick of Truth, it often seems like you are controlling an episode of the television show instead of playing a game.

Everything here is top-notch- the animated look of the show is recreated flawlessly, and all the voices are played by the real actors (most of which are Parker and Stone), so the immersion is complete. Little touches like a barfing animation when your character is "grossed out" (the game's version of poisoned), a sixth-grader filling up a piss-balloon, new pieces of equipment integrate into your superhero costume... everything is put together wonderfully. Cutscenes are beautifully integrated, and often you can hardly tell when you lose control so the game can play out a given animated sequence.

South Park: The Fractured But Whole is an entertaining and immersive romp through the world of South Park. The game is crammed with items to collect, powers to upgrade, fun side quests and a suitably ridiculous main quest line that will have you laughing more often than not. Although the combat is a little easy, it does ramp up as you go along, with a smooth learning curve that fits RPG vets and newcomers alike

How to get the key? 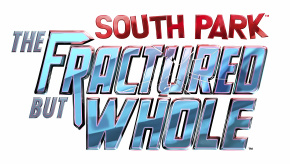