Sine Mora EX is the revamped HD upgrade and expansion of the 2012 SHMUP, Sine Mora, and it’s got some bang for your buck; extra modes, new stages, you name it. This new version gives you a wide variety of planes and pilots, all of which play differently and each plane has its own special moves, attack patterns and distinctive look. The story mode introduces you to the characters you use as pilots, along with their motivations and (often quite dark) backstories, as well as their individual prop planes, which are characters in and of themselves.

The game is presented as a 2-D side-scrolling shoot-'em-up; usually you are fighting to the right, but the occasional stage segment or boss will have you facing left, instead.

You play as a man – er, a buffalo-man-thing (everyone's an anthropomorphic animal) out for revenge, seeking to take out the man who killed his son during a wartime mission. There's a twist, however – your beast-creature is capable of time travel, in addition to the ability to send others back through time as well. The upside of this is that he can send his allies to take on his enemies in multiple physical locations at once, with the same starting point in time; several of the scenarios share dialogues in order to reinforce the fact that they are happening simultaneously. The only limitation is that any given pilot (and plane) can only occupy a given time period once – you obviously can’t chance causing a temporal paradox by meeting yourself – but it also means that, if you lived through it when you were younger, you can't go back to any time when you were alive.

In any given stage, you start with a specified time limit, and that's all you have to discern your current damage status; there is no health bar in this game. However, taking hits will cause your remaining time to drop (sometimes precipitously), and yes, ramming an enemy ship or other properly dangerous object can end up with you getting one-shotted and facing the Continue screen. Simply running out of time causes you to explode, as well. You can stave off this fate by shooting enemies (each kill adds a little time to the meter, and few enemies die in one hit), by taking out mini-bosses, by reaching checkpoints, or by collecting time Extend capsules. That being said, the best way to conserve time is simply to avoid taking hits or running into the landscape, which is often easier said than done.

Keyboard/mouse and native controller support. 2-player co-op mode available where one player controls the main plane and the other controls a little flying orb that can shoot in all directions. They can also be combined to add to your overall firepower while sacrificing the orb's mobility.

Simply gorgeous. There's no other way to describe them. It's not often you see a shoot-em-up graced with visuals quite this tasty. The designers know it and they take advantage of every opportunity to have your planes bank further into the player's field of view, allowing you to take a good look at the vessel's detailed models – even during pauses in the middle of boss fights! It’s a smart play, and it lets you really appreciate the models by displaying them in an intelligent way.

Great sound – sometimes deceptively calm, often pulsing in all its glorious chiptune-y glory. All well-placed and really suitable for this style of the game. Great voice acting, as well, which helps to bring the static character portraits to life.

This wonderful, HARD game just gets tougher the further and better you get. Of course, you can only get the REAL ending after playing through the game on both normal and hard modes, but it is a joy to get there.

Sine Mora Ex Review
Story:
85%
Gameplay:
92%
Graphics:
100%
Sound:
85%
Fun factor:
95%
Atmosphere:
95%
Pros and Cons
Looks incredible
Progressive difficulty (on arcade mode – i.e. the better you perform, the harder it gets)
a good starting point for folks looking to get into “bullet hell” shooters
Clear, step-by-step tutorial unlocks abilities at just the right speed, and does a good job of explaining them
Detailed backstory, which you get to see more of as a reward for playing all difficulty modes
Solid voice acting
Can be too difficult for some
Some story concepts and themes not for kids – but then, it's rated M – it's expected 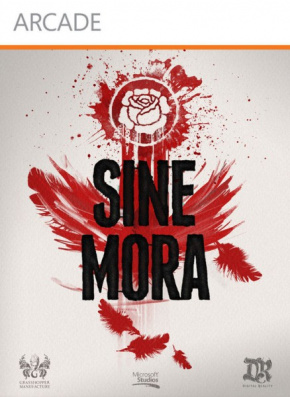