Telltale's Batman: The Enemy Within Review

Hey there, Batman fans. It’s been awhile, both for us and the caped crusader (unless you just binged Telltale’s Batman Season One in the last couple days). A year has gone by (for Batman, not us) since the events in season one and it’s been a long one. It’s been a year since Thomas Wayne was posthumously outed as a criminal, Batman smashed up Oswald Cobblepot’s face and Bruce Wayne spent the night in Arkham asylum.  An entire year since Vicki "Lady Arkham" Vale was presumed dead after a climactic fight with Batman that may or may not have rattled Alfred more than he’s letting on. So, what’s been going on since we were away?

Well, the Riddler is back in Gotham, for one. And by “back”, I mean that according to Telltale, the Riddler used to run around in Gotham causing trouble before mysteriously disappearing some time ago. With his return comes the usual sadistic riddles, albeit with some Telltale-style brutality attached. Although Riddler is still recognizable and his M.O. remains about the same (#1 tell riddles, #2 screw with Batman), Telltale has tweaked him a bit, just like they did with Cobblepot in Season 1. Learning of the Riddler’s past activities and the underworlds’ fearful response to his actions lends Nigma's return some weight. Much like Cobblepot/Penguin, the Riddler was rarely a physically challenging foe for Batman; the true challenge was matching wits with someone who is almost as smart or even smarter than him. It’s nice to get a more brutal, “hands-on” version of the Riddler, as well as his presence having a bit of gravity when he arrives due to his past actions. It's interesting to think of these super villains running around causing havoc in a pre-Batman Gotham.

After a quick in-game recap, we get straight to it. Bruce is surveilling a high-rolling criminal when the Riddler crashes the party. I expected the usual “villain intro”, which is generally a quick display of the character’s evil might before a flashy escape, but instead, Telltale throws you right into the action, which really got the episode off to an explosive start. As you brawl it out with Riddler, Telltale introduces you to a few tweaks in the combat system, which are definitely needed to keep things feeling fresh. You can hit multiple buttons to fire off multiple attacks or grappling lines and there are a lot more choices this time around; body-slam or roundhouse kick? Face-smash or leg sweep? It’s not a huge change, but the extra choices in combat go a long way in a point and click fight.

Throughout the episode, the Riddler runs around Gotham, taking a page out of the Saw series by locking victims in riddle-based death traps that mostly chop off people’s fingers. Riddler seems to really hate fingers for some reason and plenty are lost this episode. The puzzles are the usual Telltale fare, not too difficult, but mostly satisfying. I realize you have to make the game accessible to everyone, but it would be nice to have some more difficult puzzles to solve. The usual “link evidence” detective mode is in full effect here, but the choices are pretty obvious for the most part. I am still waiting to feel like “the world’s greatest detective”, something that has been pretty underplayed this series.

Another new character in this episode is Amanda Waller of Suicide Squad fame (and, yeesh, that’s not the kind of fame you want) and she makes for an interesting wrinkle in Bruce Wayne and Batman’s life. She brings the “Agency” along for the ride, a classic, mysterious, shadowy shadow organization that operates behind the scenes with complete impunity and government money. John Doe also makes his return, freshly released from Arkham. He is almost sympathetic at times, a fish out of water ex-con who doesn’t know what to do with his freedom or himself. It’s interesting interacting with him, knowing that one day soon he will turn into your arch-enemy, especially since your interactions with him are as Bruce Wayne. These conversations are mostly a tightrope walk as you try to get what you want from him without letting him know that you really aren’t his friend.

Telltale has freshened up the conversational consequences in The Enemy Within by implementing a “relationship changed” feature. At certain times you will make a conversational decision, only to have the words “Your relationship has changed” float across the screen. It makes you stop and question your decisions, whether it was lying to the person or revealing an unpleasant truth to them. A few times it made me want to restart and try a different conversational path, as I want to be the “good guy”, but I also have to cover my ass as Batman. It’s a small thing that makes a big emotional impact on the conversations.

Overall this is a solid entry into the new season. The fights have been spiced up a little bit, the detective bits are underwhelming intellectually but satisfying from a gameplay perspective and there are enough big shakeups in episode one to keep me wanting more. 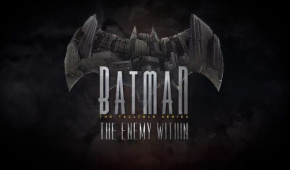