You play as one of two samurai – a traditional male Bushi (Tsurumaru) armed with a sword and, uh, hand grenades, or you can assume the role of a female Kunoichi type (Sukane) with a kitsune/fox spirit to help her along. You move along the path until you come across either destructible items or enemies- the former you smash for coins and power-ups, the latter you smash because that’s what samurai do. As you progress, you have to watch for pesky tanooki disguising themselves as item pickups, and you better pay attention, since the greedy bastards will reappear throughout the stage and steal your loot if you don't take them down in a hurry. You’ve got your work cut out for you.

You (and a friend, if you’re going for local co-op play) have been ordered by your leader to suppress a nearby rebellion. Select your home “school” for specific buffs, wade into battle, and go kick some ass. In fact, kick all the ass, and do it quickly. Once your enemies lie broken and defeated, head towards the next cluster of enemies, rinse and repeat. Eventually, you'll run into a boss you need to take down, which unveils more of the story and you keep moving. Perhaps you will accomplish your goal…or perhaps you will find that not everything is as straightforward as it seems.

These plot twists present the chance to make some interesting choices in Samurai Riot; do you remain loyal to your Master and your clan, or do you switch sides, dishonoring your Samurai legacy but aiding those who are truly in need? The choice is yours, and it will directly influence your path throughout the game, which future choices are available to you and which of the eight endings you will receive.

Samurai Riot is controller and keyboard-friendly right out of the box. Each character has the same basic move-set: slash/punch, kick, jump, grab. Hit jump while flying back from an enemy's strong attack to tech out and land safely. Hold either attack button to perform a charged attack or toss a high explosive (grenades with limited availability for Tsurumaru, a kitsune on a timer who drops large bombs for Sukane). Grab your enemies and either wail on them or give em a toss. Jump over them and hit the buttons + down to chuck a projectile or an explosive. You can also use special “Rage” attacks, beginning with a fast multi-hit combo for Level 1, while Level 2 has you leap into the air and drop a bunch of grenades in a line.

Enemies are of the repetitive, generic kind, most having a vaguely Warring States- era feel to them. Better, badder versions of any given enemy will have the same model but different-colored outfits; a standard spear-man will saunter up and try to stab you, while the upgrade will keep his distance and charge from afar; the tonfa-wielding ladies will melee you and block some of your attacks, while the upgrades will block constantly and counterattack your moves with a dragon punch. Luckily, your grenades will make quick work of any non-boss enemies.

Samurai Riot has a pretty decent, hand-drawn and somewhat cartoony art style which fits in perfectly for the setting. One odd note – the characters populating the game and their dress suggests medieval Japan, but in the big city, you come across what appears to be pay phone booths and modern building structures that are under construction. It’s a strange blend of time periods, but then again, you are a samurai with a sword and grenades. The sound is crisp and clear and while some of the music is more era-appropriate than others, overall it fits very well.

Samurai Riot is a solid, old-fashioned beat-em-up that manages to make an old genre feel fresh, helped especially with the choice system.

Samurai Riot Review: Grab Your Blades And...Grenades?
Story:
85%
Gameplay:
80%
Graphics:
80%
Sound:
85%
Fun factor:
80%
Atmosphere:
90%
Pros and Cons
Controls are intuitive and (mostly) smooth
Decently-paced arcade gameplay
Grenades and bombs are fun to use and pack a real punch
Needs a wider variety of characters with different mechanics
Bosses all seem to have infinite super armor, even enabling them to hit you out of a super/rage move. 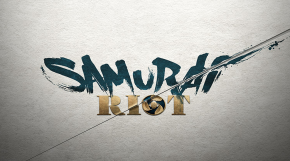