Onion Knights is a very literal take on the “Tower Defense” genre, albeit with a bit more interactivity and direct control. There are no turrets to place atop maze walls, dutifully waiting for the inexorable procession of enemies and tanks to blunder into their range - rather, you have direct control over your little knight in a mobile turret (which can only move up and down), allowing you to directly respond to any area of the screen except the tower itself, which you are defending. It’s a big job for such a little knight.

Fortunately, you have the aid of three allies: a giant hammer-wielding knight who can knock foes back, a lady sharpshooter who can lay mines and take down enemies who sneak past your main cannon and a tinkerer who fires off deadly homing missiles and other projectiles. You also have access to special consumable “skills” (such as a sneeze that wipes out all foes on the field) and persistent, upgradeable “Hero” units who can help out for a limited amount of time, just once per battle.

The Onion Knights have been set the task of defending their nation from the oncoming hordes of the Curry Kingdom! Strap into your cannon, select your special weapon and skill loadouts, cry havoc, and loose the dogs of war!

...And that's about it. If you’ve ever played tower defense before, you know the drill; keep the bad guys away from your tower, or you’re done. If they manager to infiltrate and scale your tower, or your cannoneer runs out of HP, then it's game over, man! Game over!

The game throws hordes of enemies against your little cadre of brave warriors, all of which are intent of taking you down. The enemies are fun and varied, from armored knights and birds to dragons and ninjas to enemy hero-class units that will give your little knights a run for their money. You objective is to mow these bad boys down while trying to keep your combo counter high, while you simultaneously dodge thrown projectiles and incoming cannon shots.

For controls, Onion Knights only offers keyboard and mouse; up/down for the main character (who is always in auto-fire mode) and shortcut keys for your three allied knights. You have up to three special skills and up to three special heroes who will pop in for a minute or so to help with the war effort. ESC usually takes you directly to the Quit screen, rather than backing you out of the current menu area, so watch it, lest you bail in the middle of a battle.

The graphics are pretty darn nice for a mobile port. The characters are the cutesy, hand-drawn-looking fare, as well as the animations and backgrounds. As this is apparently a mobile port, there's no option to control the volume level aside from just a Mute function, and the game is LOUD at default settings.

A fun looking and pleasant little time-waster, this is an enhanced port of a mobile game. It's easy to pick up and it's nice and cheap, in addition to being different enough from most tower defense to stand on its own. 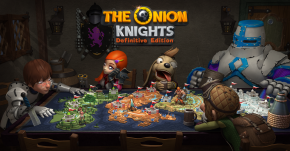