Set in an isometric view of a very highly-stylized Tokyo of the future, you need to learn the lay of the land, seek out your targets, and deal with them with extreme prejudice. Luckily, you've got some methods to your stealthy madness: sometimes you'll be a thief in the night, sneaking in and out with a silent katana; other times, you'll toss caution to the wind, along with handfuls of grenades, and a few well places rpgs from a trusty rocket launcher. And of course, sometimes you'll need the real heavy artillery – by which, I of course mean, bananas.

In the meantime, you'll wander around, getting credit for finding specific vistas, picking up cat icons and snagging color swatches to apply to your weapons and your badass long coat. As we all know, nothing says “I'd better not mess with this dude” than a hot pink AK-47. This game encourages you to explore, and – more to the point – try and get through your missions without being caught, or taking out every enemy you find...or ideally, both at once. Luckily, you're a rather spry assassin. See something out of reach? No problem, just rotate your view until you can see a new path. If it looks like you can make the jump now, you probably can. The game also provides a handy-dandy indicator  to show you just where your parkour shenanigans will get you. If you miss, no biggie. Aim for lower ground, a passing hovercar, or just fall to your untimely death and you'll respawn a few seconds later.

You are a poor, unfortunate soul who has been framed for murder in a major assassination plot. So, what does a man do in such a situation? Why, become an assassin for real, of course! Hey, why not? Kinda strange that someone managed to die for real in a society where everyone is effectively immortal, thanks to a combination of modern medicine and teleportation/synthesis technology, but hey, you're not paid to ask questions. Conveniently enough, this same tech also allows you to change your appearance at will, which can help you get away from enemies – provided that they don't see you do it, of course.

Your arsenal is suitably varied, and readily upgradeable: You start out with a basic pistol and (almost immediately thereafter) gain access to grenades and a multi-shot burst pistol; beyond that, you can get anything from sniper rifles to SMGs to rocket launchers. For the stealth-inclined, you can also find a katana as part of an early mission requiring its use. It makes for satisfyingly quick, silent kills, whereas every other weapon type has a certain audible radius which will alert both your (armed) enemies and innocent civilians (who will run away). Each type has its own uses in certain mission types, and each gains upgraded versions once you can afford them (and find a seller). Some employers will want a mark to be taken out cleanly and quietly, mandating the use of the katana. Others will want to make sure everyone knows that the killing was no accident, so they will require you to take your target down messily, with grenades. In other mission types, you will be asked to spark off a conflict between two other factions, with your purpose thereafter being to make sure none of them leave the area, ever. In yet another, you might be asked to, say, eliminate a gang of punkers by luring them into an enclave inhabited by well-armed nudists who have a bone to pick with the punks. In case you're wondering, no, you won't get bored easily.

The controls can take some getting used to, but there is WASD+mouse and controller modes built-in, which is nice. Some missions feel better with one, some with the other, so I found myself switching between the two different modes of control.

Graphically, the game is pretty, almost beautiful...if you're into the game's specific style. Personally, it's not really my taste, but I chalk that up to personal preference, not a fault of the game. The sound is minimal and subtle, but it works well with this kind of title.

This is a fun and different sort of game than what you might be used to from the usual stealthy fare. The game has a suitably-strange design and methodology, and it's definitely worth checking out.

TOYKO 42 Review
Story:
80%
Gameplay:
95%
Graphics:
80%
Sound:
80%
Fun factor:
85%
Atmosphere:
95%
Pros and Cons
Wonderfully bizarre aesthetic
Huge maps with tons of teleport and respawn locations (vending machines)
TONS of secrets to find
Weapon skins, trenchcoats, cats, buttons in the environment that trigger access to hidden areas, etc.
Game makes it very clear (via an icon with a line connecting it to your character) which indicates exactly where you will land from jumps
Encourages exhaustive exploration
Even fully-zoomed in, characters are quite small
Most of the doors you see NPC's going in and out of are inaccessible to your character.
Visual style may not appeal to some 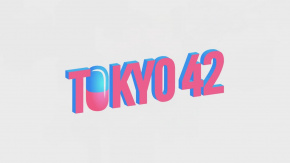