If the Call of Duty titles are the “training wheels” of war FPS, then Day of Infamy is the bike. And by “bike” I mean a roaring, squirrely Harley Davidson. It doesn’t come with saddlebags, chrome or sweet handlebar streamers. Hell, it doesn’t even come with a mirror. Or a headlight. Or a helmet. This game, to put it simply, is hardcore. Welcome to WWII, soldier.

This is the game you wish you were playing as 11-year-olds camp spawn points and scream into the mic, claiming to know where your mother is and what she’s been doing (hint: you won’t like the answers) and asserting intimate knowledge of your personal sexual preferences. Day of Infamy starts out feeling confusing and bare-bones. Questions like: Where am I going? Where is my aiming reticule? and Is that my teammate? abound while you get used to the gameplay and dying over and over. Luckily, much like Dark Souls, the things you start off hating, you end up loving.

Day of Infamy holds no hands and refuses to coddle. There’s no mini-map, ally-indicators, aiming reticule…in fact, if you want to know whether or not the enemy you just shot at is dead, you’ll have to hump over there and confirm your own kill. Which, more often than not, will get you killed. There aren’t any arcade style numbers splashing across the screen and no pop-ups telling you that you are, in fact, the man. Day of Infamy is confusing, difficult, chaotic and at times, frustrating. And I loved every minute of it.

Whether you are fighting for the Commonwealth, the good ol' U-S-of-A, or the Germans, this game is a blast. The way you can coordinate with your fellow soldiers and the myriad available classes will have you coming back for more, no matter how often you are shot, blown-up or fried to a crisp. The classes themselves are more or less pretty straightforward: Officer, Flamethrower (lord, this one is fun), Rifleman, Radioman, Support, Engineer, Machine Gunner, Assault, and Sharpshooter. There is a team restriction on how many players can be a certain class, which is fine, since you don’t really need an entire army of fire-bugs getting sniped to death as they attempt to burn the other army alive.

But while classes in Day of Infamy are familiar, the ways you can use them are what's really interesting, if not downright innovative. For example, the radiomen and officers are kind of a one-two punch, serving in tandem as support classes. As long as they get the OK, radiomen can call down reinforcements in the form of artillery strikes, or radio in ammunition and health drops, which are equally important. It’s fun to try and keep the enemy on their toes while simultaneously keeping an eye on your important support troops. The entire game forces cooperation and a well-oiled, complimentary team will wreck shop, while rouge units who are in it for themselves are quickly punished with a well-placed bullet to the face from cover.

The place where Day of Infamy stumbles, however, is in the graphics department. This game just looks old. As in, 4-5 years old. It isn’t a game-killer by any means, but a little polish graphically would have gone a long ways. There are rough edges and some strange-looking textures, but once the battle is in full swing, you’ll be too busy to notice. The sniper who is homing in on you definitely won’t mind that you don’t have a beautifully crafted face. He’ll be too busy looking for pink-mist as his bullet rips through your dome-piece to care.

If the graphics are dated though, the sound is cutting-edge. The guns chug and thunder, planes swoop and roar overhead, delivering their destructive payload on hapless foes, and there are an abundance of different voices and accents on display here. The screams are chillingly well done, and given that your player often lets one loose while dying, you’ll be hearing them a lot. Something about having very little in the way of a HUD, crosshairs etc. makes the sound even more effective, helping to really immerse you in the combat. Definitely play this game with good headphones or even better, surround sound.

Once you get the hang of Day of Infamy, it might be hard to go back to your old CoD ways. The atmosphere is carefully built by your surroundings and the lack of any help. No HUD. No targeting reticule. No points on the screen. No kill count. No mini-map or radar. No nothing. Apologies for being repetitive, but it is truly surprising to be stripped of these things, like having someone take away a cane that you had been using for so long you forgot you were even holding it. The game boils down to you, your weapon and a long expanse of ground where you hope a sniper isn’t settling his sights on your poorly protected noggin. Knowing that one bullet will likely kill you, you creep around anxiously, waiting for the furious battle that will end your life or prolong it. This is a game of inches, and pray-and-spray has no place here. Firing without careful use of your iron sights is usually just a good way to give away your position and waste your bullets. The screams of your dying mates and the thunder of firearms are your only real constants here, and the learning curve is indeed steep. Patience and frenzied activity go hand in hand, bringing to mind the calm of a river just before you plunge down an 8 foot vertical drop of white-water.

With ten different maps to play, expansions on the horizon and a rather low price point, you should grab this game, regardless of whether you're a twitch shooter needing a fix between CoD rehashes or just a gamer that likes a challenge. If you like FPS multiplayer, picking up Day of Infamy is a no-brainer.

i want this please email 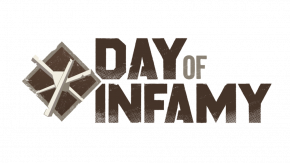