The Crow’s Eye, published by Nkidu Games and developed by indie studio 3D2 Entertainment, is a first-person psychological horror game with puzzle and platforming elements. You don't have to worry about zombies lurking around every corner, nor all sorts of hideous beasts lurking for just the right moment to strike (though you will come across a few of those). You won't be going in guns blazing for this one, for your primary adversary – aside from the lunatic who put you here – is the old school itself.

You'll need to solve puzzles, starting from simple box/jumping puzzles to platforming while under the affects of adrenaline (here represented as a brief period of slowed time, during which you can jump much farther than usual), on up. The game has a basic crafting system, allowing you to make crude bandages, lock picks, and more to get you through the game alive and (hopefully) still sane.

The story in The Crow’s Eye goes like this: In 1947, renowned medical college Crowswood University gets shut down after a number of unexplained disappearances took place there. Now, in 1966, you have been brought there as part of some bizarre experiment. Your goal is to survive and get back home. Bits and pieces of evidence, photos, documents, and recordings will help you to piece together exactly what happened there, as well as some of the University's dark secrets.

The controls use the mouse and a slightly unusual keyboard/WASD layout. Controller support is available (just hit any controller button to swap), but incomplete; on my Xbox One controller, the D-pad was not usable. On the keyboard, it’s WASD to move, hold right-click to grab/throw items (plenty of delicate glass to smash!), E to interact, V to play recordings, F to toggle the map, TAB for inventory, etc. One beef I did have with the game is the way it handles saving – there is no autosave function, and in fact, you can only save the game at all in certain pre-defined locations.

The game’s graphics are suitably creepy, and they can be maxed out even on a mid-range system. The environment feels like a decrepit, abandoned school facility that has been booby-trapped for your inconvenience – i.e. the perfect setting for this kind of game, though it does tend to get repetitive after some time. The dirty walls – which are festooned with some very odd paintings – are that sort of off-white color used to keep the inmates subdued in schools and prisons. The Crow’s Eye manages to be unsettling without the tired crutch of “jump scares” to do the trick, which is refreshing for a horror game.

In terms of sound, the background music changes as needed to help establish tension. There’s some pretty solid voice work all around; a frightened professor has a tremor in her voice; your mad jailer has a distinct Mark-Hamill-as-the-Joker feel to his ravings, etc.

Overall, if you'd like to play Resident Evil without having to watch your back and blast zombies all of the time, The Crow's Eye could be right up your alley. And it’s just the right price for the length, too, so good on the devs! (Review by Eric Kei)


The Crow's Eye (PC)
Story:
85%
Gameplay:
90%
Graphics:
85%
Sound:
90%
Fun factor:
85%
Atmosphere:
95%
Pros and Cons
Good, subtly creepy atmosphere, without an over-reliance on jump scares
Amtagonist has a definite "Joker" feel to him
Makes you work for story exposition
No autosave/save any time available
Environments tend to look the same after a while

I want this game

i love this game

give me a key and i will receinse 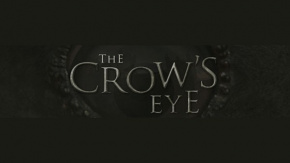