You're exploring an apparently-abandoned complex of buildings (which are shaped like, and named after, a number of basic 3-D shapes), dealing with the overgrown plants, diverting power, solving a few simple puzzles, and opening doors so you can get further in and do it all again. Small Radios Big Televisions is an adventure puzzle game from indie developers Fire Face Corporation and published by Adult Swim Games.

As far as the story goes – I’m sure there's a story in here somewhere...Maybe I left it in my other pair of jeans...About all there is, is the subtle mystery of why these towers were (apparently) abandoned and left to go to seed, yet they still have power. Not much else is evident while the game is still interesting.

The gameplay is basically point & click. Items such as doors, gears, etc. that you can interact with get highlighted on mouseover, allowing you to lug certain items from room to room in order to move other items and use them to solve some simple physics puzzles. You also find a bunch of items that look for all the world like old audio cassettes, but contain data used for immersive VR-like worlds.

These worlds allow (more or less) 360-degree views while you either remain still within them (for some), or travel through (on rails), looking for green gems which you can retrieve and bring back with you into the “real” world. Said gems are then used as keys within the polygonal rooms, unlocking new sections of the buildings in question.

Run out of keys? No worries! Each building also has at least one set of devices that have a strong magnetic field. Running a tape over these devices corrupts them (remember to snag the gem first!), making it possible to them delve deeper into each tape's world. The thing is, the worlds within the magnetized tapes are now corrupted. Sometimes they go black & white, or some bizarre amalgam of color and black & white, or simply glitch out the worlds themselves and the objects within. Trippiness aside, the corrupted worlds will also (eventually) yield more gems to put into more locks.

The controls are very simple: mouse controls to move to new rooms (your “character” may or may not be physically present) – you see entire 2-D “rooms” at a glance, and moving the mouse mostly allows you to slightly alter the angle from which you can view the room.

The graphics in Small Radios Big Televisions are bright and colorful, no-nonsense, crisp and clear, but not exactly eye-popping. Nothing to complain about here, though. The sound is mostly environmental – in the “real world,” sounds are generally subtle, ambient sounds and tunes, along with appropriate beeps, bleeps, and dings when activating widgets, opening doors, etc. Sounds within the VR realms provided by the tapes – both pre- and post-corruption, feel much more surreal and strange at times, helping to sell the idea of the bizarre, limited VR environments.

Overall, Small Radios Big Televisions is a decent indie adventure game. Check it out if that’s your thing. While somewhat light on story, the virtual worlds are intriguing, and the whole “VR cassette tape” concept is pretty clever. (Review by Eric Kei)


Small Radios Big Televisions (PC)
Story:
70%
Gameplay:
70%
Graphics:
85%
Sound:
85%
Fun factor:
70%
Atmosphere:
90%
Pros and Cons
Wonderfully surreal environs, especially "within" the tapes' virtual environments
The "VR tape" aspect is clever
being able to corrupt them (while still being usable) sets the game apart
Looks good, sounds good.
Story is in there somewhere...somewhere.
No explanations, minimal hints as to what the heck you're supposed to be doing
Map isn't terribly useful 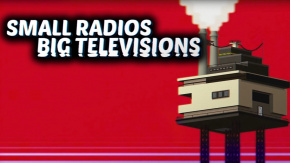