Ultimate Marvel vs. Capcom 3 is a pretty well done updated version of 2011's hit dial-a-combo arcade fighter, originally released on seventh-gen consoles. Capcom is re-releasing this title before dropping Marvel vs. Capcom: Infinite on us later this year. UMVC 3 looks nice, it plays nice, and it has all of the bells and whistles, including a huge roster and plenty of digital unlockables. You could do much worse. On the PC, the game runs at a silky-smooth 60FPS at 1080p, even with the pretties cranked up, even on a moderate-level system (such as my humble PC with an Intel Core i7 and a GTX 660 card).

As far as the story goes, well – Galactus is hungry. Make it clear to him that Earth isn't on the menu.

You choose a team of three characters from the Marvel and Capcom multiverses and power through an assortment of your fellows, en route to a final showdown with the world-eating Galactus. Dial-a-combos and infinites are the name of the game here. Call in your allies to take potshots at your opponents, or switch out with them entirely when things are looking bad. First team to KO the other three guys wins.

You and your team of Phoenix Wright, Magneto, and Chun-Li can go up against the Big G offline, or go online to get brutally beaten down by the veterans playing there, if you can find them. The game is functional online, but this is still a five-year-old title that has had precious little work done in terms of character balancing in that time. Also, if you’re looking for him, Mega Man is missing – an omission that Capcom did get some flak for, but hey, I guess having X-23 makes up for it?

The PC controls use the keyboard, but there’s also native USB controller support. Control remapping is available to a certain degree, and a simplified control scheme is available for people who are completely new to the game/genre.

The graphics in UMV3 are quite impressive, considering the age of the game. Characters and their powers look like they were ripped straight out of the comic books (the Marvel ones, at least), the backgrounds suit them well, and the frame rate keeps up quite nicely on most systems. As for sound, it’s not bad, but it’s nothing astounding, either. It’s enough that you can “feel” the hits and blasts and explosions, which is really all anyone can expect from a fighter.

Overall, Utimate Marvel vs. Capcom 3 is a worthy buy if you've never picked it up before, or if you don't have your old copy anymore. Unfortunately, it’s still got the same balancing issues the original release had back in 2011. Of course, the main reason we even got this (well done) port was because Capcom is trying to raise hype for the upcoming Marvel vs. Capcom: Infinite, so fans of the series should really keep their eyes peeled for that one. (Review by Eric Kei)

Ultimate Marvel vs. Capcom 3 (PC)
Story:
60%
Gameplay:
95%
Graphics:
85%
Sound:
80%
Fun factor:
90%
Atmosphere:
90%
Pros and Cons
A competent port of a 5-year-old game
Easy to pick up and play – more newbie-friendly than many fighting games
Looks great, runs well even on older hardware
Story?! We don' need no steenkin’ story!
It is a 5-year-old game, and balancing issues are still unresolved
Can be hard to find others to play against online
if you don't have plenty of experience, don't even bother

yo quiero una - i want the key

I want the key please

can i get the key?

Can I have a key please ? 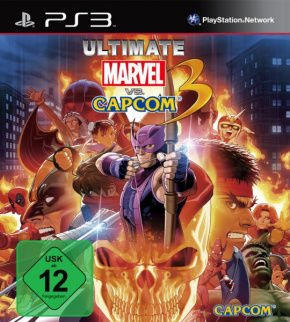