Maize is an adventure / puzzle / walking sim game about a corn maze, that old stand-by of rural America, but with a very important twist. The pun-tastically titled game is the second project developed by Canadian indie studio Finish Line Games, based in Toronto. It’s a short game, but it’s pretty much everything it advertises itself to be.

When the game begins, you wake up in the middle of a corn maze with no apparent exit. Problem is, some of the corn is not only alive, but sentient, and quite capable of moving on its own, thank you very much. You can find all sorts of useful items such as vise grips, keytags, and of course, incredibly stale English muffins to help you on your way. The inventory system is blissfully simple: Items you no longer need disappear, and everything else is on a simple rotating list of items you can select from using the shoulder buttons on your controller (or whatever key you choose). Oh, and there's also a sarcastic, grumpy Russian Teddy Ruxpin lying about who accompanies you once you help him to get his gear together.

You'll piece together the story over time by collecting various files and documents about a grand, over-spendy experiment by a foolish, careless co-leader of a wealthy corporation. One of their major projects ended up creating the sentient corn in question. It's up to you to delve deeper into the mystery presented by going along and seeing what there is to see in their extensive underground complex, piecing together a picture of just how this all happened. For example, the two scientists who head the corporation left sticky notes for one another all over the place; mostly about the absurd expenditures one of them is racking up (such as a solid gold toilet).

The graphics are really well done (especially for an indie game), if a bit repetitive. There's really only so much you can do with the concept of a corn maze on a rundown farm, or a suspiciously empty(?) office complex. Interactibles in the environment are helpfully highlighted when you mouse over them, helping to avoid the old “hunt the pixel” problems from days of yore. The sound is pretty solid, with appropriately creepy ambient music and crisp sound effects.

Overall, Maize is a bizarre, somewhat trippy take on the genre with a good sense of humor. It’s well worth checking out if that's your sort of game, but at a current price of $20, you might want to wait until it goes on sale, as it’s still quite short, and not entirely free of bugs (indie games of this sort rarely are). All in all though, it’s a few hours’ worth of good fun. (Review by Eric Kei)


Maize (PC)
Story:
80%
Gameplay:
85%
Graphics:
90%
Sound:
85%
Fun factor:
75%
Atmosphere:
95%
Pros and Cons
Pretty much what it says on the box
Weird little mystery
Useful hints on what to do with specific objects, but not until you NEED them
Quirky sense of humor
Slow pacing
Repetitive visuals
If you just can't FIND the object you need to interact with something else, good luck
Very short

Hi I would be more than happy to test this game and review it!

What is the key?

Hi I would be more than happy to test this game and review it! 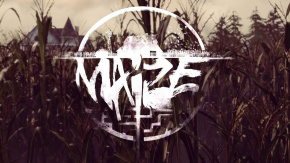