From Siberian studio Warm Lamp Games comes a game with a fascinating premise – you’re the landlord of a state-owned tenement building in a totalitarian dictatorship. Amidst conditions of extreme repression, you’ll have to struggle between protecting your family, making the best out of your situation, and scraping by in order to survive, all while trying to remain human.

Beholder begins with a brief orientation on your new job, and you also get to witness your predecessor being carried off and relieved of his duty, if you ever needed a little reminder of what’s at stake here. As landlord in service of the State, it’s your job to keep the tenants happy, make minor repairs, and help the people with whatever they need, which allows them to be at ease and enhances your reputation. But this landlord job carries with it some other responsibilities as well – it’s your duty to keep tabs on the citizens in your building and report any funny business to your superiors.

Everything they do is of interest to the government – their hobbies, their reading preferences, their feelings for other tenants, etc. You’re to build tenant profiles using any information you can gather, because that’s what the State wants you to do, and they’re even willing to pay you for it. You also have to report any illegal activity so the State can properly punish the guilty party, and lots of things are illegal in this country – possession of foreign currency, the works of certain philosophers, the use of a foreign language, even the consumption of apples. Your reports can quickly land one of your tenants in the gulag. All of this takes place within a full-blown totalitarian dictatorship where arbitrary and anonymous government regulatory agencies rule by fiat, and widespread shortages lead to a flourishing black market in goods like medicine, books, and modest luxuries like chocolate and flowers – everybody owes somebody else a favor, and everyone’s got someone else under their thumb.

Throughout the course of the game, the interplay between the various governmental regulations, actual conditions on the ground, and your own personal objectives can lead to some pretty interesting choices. The gameplay is governed by three separate resources: Money, which you need to purchase cameras and other useful goods; Reputation, which you can use to put pressure on people – but if it gets down to zero, you’re out of a job and the game is over; The third major resource is Time, as you have to complete most tasks within a certain time frame or bad things might happen – loss of reputation being the least of your worries. The only two actions that allow you to gain reputation and a little money to boot are keeping profiles on your fellow tenants (i.e. general information about them) and formally denouncing them for transgressing the government’s manifold directives.

Your first assignment is to monitor one of the other residents in the building, which means waiting until the time is right to set up a surveillance camera in his apartment (paid for out of your pocket, of course) – and that won’t be until he leaves to go to work or to use the communal kitchen or laundry room elsewhere in the building. When you finally get the opportunity to do so, you can carefully sneak in through the front door of the apartment and mount the camera on the fire alarm. Are you going to use this chance to snoop around a bit? Maybe this guy’s got a gun, or maybe some prohibited reading material in his cabinet. Or you can get out there quickly and chat with another tenant who happens to be walking by. Friendly conversation often yields information that can add to the price you can expect to receive for your profiles.

Whenever you can interact with an object, an icon will appear, which you can click to perform an action. This will start a timer that runs until the action is completed. But be careful not to get caught off guard. In the 2D view of the building (which you can zoom in and out of), you can see what’s going on in all public rooms and in all the rooms you're monitoring, but the inventory window often blocks your view of what’s going on behind it. Say you find something interesting and have to get back to your room to do some paperwork on it – you’ve got to make sure to keep your eyes peeled in case someone’s walking by that you absolutely have to talk to – maybe you can make a deal with them, or maybe they have some important task for you to do.

All of this makes the gameplay in Beholder an interesting mix of completing tasks for your residents in the form of adventure-game-type puzzles, spying as a series of quick-time events, and a steady stream of fundamental moral decisions. For instance, one of the tenants is feeling lonely and seeking female companionship. What’s it to you, right? Well, turns out the man is a doctor, your daughter happens to be sick, and medicine is pretty hard to come by. He can get you some, but for a hefty sum of money. How nice then that another tenant is looking to unload a couple of cases of canned meat.

You take the risk of being sold out to the authorities and close the deal. You then give the cans over to the local black marketeer, but he tries to screw you over by paying you less money than you already promised to the guy who provided the cans in the first place. So what are you going to do? Are you going to take a loss and provide the missing funds out of your own money? Maybe you can just undercut your supplier, and risk losing reputation – or do you threaten to blow the whistle on him, hoping that will keep him quiet? When you’ve got four, five missions going on at the same time, it can get really hard to get things done before the deadline while also earning enough reputation and money for yourself to make ends meet.

Not all the tenants are as harmless as they look, either. Who knows what an elderly librarian is capable of if he finds himself backed into a corner? And at the end of the day it’s not just your own fate you have to worry about, either – if your reputation ends up in the tank, you can quickly find yourself out of a job, and then your whole family’s in trouble. Of course, this means you’re going to fail often, and at least at the beginning, you’re going to have to keep making the same decisions over and over. But for those of you who don’t have a problem with this – you may even see this kind of trial-and-error business as an opportunity to try out different options - then you’re really going to like this aspect.

The graphics style is bold and distinctive, reflecting the bleak subject matter really well. The figures themselves look like wooden hand puppets, and the color palette is dominated by black and grey. Menus and other interface elements are kept simple, the tutorial is thankfully short, though it does leave one or two things out. The game’s help features make it easy enough to find things out on your own though. The original language is Russian, but there are text/interface options for English, German, and French, though I can’t speak for the quality of the translation in each case. You can save any time you want, and the game always remembers your most recently completed task.

The most impressive thing about Beholder is how it really manages to draw you into its dense, even oppressive atmosphere. It’s a dystopian world where you’re constantly forced to make a choice between your own economic and social wellbeing and your basic humanity. It compels you to do some really not nice things: steal from elderly gentlemen, eavesdrop on young ladies, kill folks or let them die – and more often than not all your efforts and moral compromises are in vain, and you still fail to ensure that you and your family survive. (Detlef Richter; translation by Chase Faucheux)

key please? I played through the demo twice.

Key please i love the game

Key please i love the game

Please can you give me the key to the game, that kind of games I really like

I would love a key of this. I played the beta and it was so much fun.

hello ..sorry ..can i get the key steam..thank you thery much

Hello it would be to test the game to advertise after

Want to test it ! 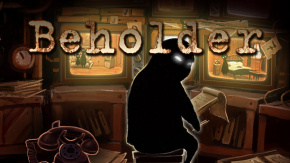