The team over at Obsidian Entertainment that brought us Pillars of Eternity has now come out with Tyranny, a spiritual successor of sorts – same engine, different take, and well worth buying. It looks like the devs were willing to take some risks, and they generally paid off. Swedish publisher Paradox Interactive, famous for their grand strategy titles, reprises their role as publisher.

Beating some sense into the peasants

The play style in Tyranny is very similar to Pillars of Eternity in many ways – your control over the AI is just as limited, though at least the allies in this one will usually figure out that your tank needs healing before it's too late (unless you have them set to the AI setting that basically says “Look out for number one, and screw everyone else).

Your party is always yourself plus up to three allies from among the six that are available – a tank, a weapons-based physical DPS-dealer, a bare-handed physical DPS-dealer, and three spellcasters. You can create new spells from Sigils and modifiers you find over the course of the game and assign them to anyone who has a sufficiently high Lore stat; even the tank has enough Lore to slap on a low-end healing spell and a taunt spell to use when his other abilities are on cooldown. No more backer NPC's hanging around taking up space, for better or for worse.

Live or die, I get to be a legend

You are the Lawbringer, an enforcer for the bad guy who has been steamrolling his way across the countryside.  Rather than beginning as some unknown nobody who works his way up to being important, you start out important (and feared), and each of your potential party members tracks how much they like and fear you, as do the various factions in the game. It's up to you how (and if...) you choose to enforce the big boss’s laws – whether to remain loyal, or to join a faction (some support him, some are opposed, some just want to be left alone), or whether you just want to leave it all behind and go independent.

Like I mentioned above, the AI for your allies is still rather limited, if smarter than the one in Pillars, but it can be indirectly controlled simply by removing spells you don't want them to cast and by setting modal combat stances. Blessedly, the AI will never use a "team attack" without you telling it to do so, as that could cancel out an action the player's character was trying to perform.

In Tyranny, the characters you encounter (especially the allies) are good and long-winded. If you want to hear everything everyone has to say (which improves both their friendliness and fear-type ratings – and you do wanna increase both in order to unlock special powers, for many of them), you can sit there for a while. The game features some good voice acting for the characters that have spoken lines. These kinds of conversations are the primary source of world-building in Tyranny, and the choices you make during the game and in the brief "Conquest Mode" intro have lasting effects upon the world at large and how others see you.

One last thing - having an ally or faction love or fear you seems like it really should be a set of mutually-exclusive opposites, but apparently such is not the case in this game.

Experience is done in a modern Elder Scrolls-style, where improving your skills (by use or by training) grants you experience towards your next level. Leveling gives a few skills a boost, along with a free attribute point and one talent (special stance, passive power, buff, special attack, or other special ability) of your choice. Fortunately, your entire party learns by watching what an ally does, albeit to a lesser extent. For example, If you amp up your Lore by spamming spells, party members will get the occasional Lore increase, as well. If you sneak around as a group, and you deal with all of the traps and locked treasure containers, their Subterfuge skill will increase – just not as much as yours will.

This has the unwritten benefit of letting you get up to par quickly – do you wanna switch from being a sneaky, knife-in-the-back damage dealer to being an evasion tank, so you can have three mages in your party raining death down upon the enemies? You can! Just grab a shield and some tougher armor, and take that role. You'll suck at dodging and parrying for a few fights, but your skills will rapidly improve through bullheaded effort.

You Must Always Maintain Control

Tyranny uses standard keyboard and mouse controls. The mouse is used for movement and – well, nearly everything, if you like. The keyboard can be used for shortcuts, quick save/load, stealth toggle, quickly selecting dialogue choices, etc.

Look at me; Hear my voice and tremble! The graphics are quite nice for a game of this type. Lots of pretty swirly particle effects on the spells/abilities, and, in at least one instance, one of your playable allies. I just wish they let you zoom in further.

The music is solid, atmospheric, and perfectly suite dot what they’re going for. Nothing jaw-dropping, but no crap, either. The voice acting is wonderful, and there’s plenty of it, too.

One more thing – if you have an existing Paradox account (e.g., from Cities: Skylines), log in to it at the menu screen. New characters will get a nice bit of starter gear or two, and your first save loaded each day will get a minor item such as food or a potion.

Sometimes it really does feel good to be a bad guy. If this is your sort of thing, check it out. I don't think you'll be disappointed. If not, watch some videos, and then maybe wait for the next Steam sale. There's just something enjoyable about playing the villain, while still being granted the opportunity to turn all of that on its head as time goes on. (Review by Eric Kei)

Tyranny (PC)
Story:
85%
Gameplay:
85%
Graphics:
90%
Sound:
85%
Fun factor:
85%
Atmosphere:
95%
Pros and Cons
Slightly improved AI
Enjoyable, customizable leveling system
Bonuses for Paradox account holders
Ally AI would benefit from allowing (optional) fine control over AI actions and spell priorities.
Music, while good, just sort of of blends in most of the time
Load times for the first game you load in a given session are very long, but improve once the game engine is loaded (Beware: loading screen is NOT Alt-Tab friendly)

can i have a key?

give me key please

I'd like to be able to test it and advertise it 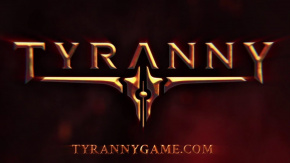