Remember King's Quest? Tick's Tales: Up All Knight is basically a spoof of that, only a good deal shorter. In any case, this new adventure from developers Digital Bounce House and publishers Phoenix Online Publishing serves as a good entry point for people who have never tried a “Sierra-style” adventure game.

The Flow and the Story

You are...er, *ahem* …you play as a hapless loser who wants to pull the town's legendary sword out of its stone in order to impress the girl of his dreams. In order to do that, he needs to fulfill the requisite quests to prove his strength, wisdom, and courage (now where have I seen those before?). Naturally, doing so will require that he do perform all kinds of feats, from scarfing down some incredibly hot mints, to helping an owl with his vision problem, to saving the townspeople from their dire fate – an eternity of being forced to play bingo and sing karaoke. The horror! The horror!

The writing is pretty good, too. It knows how to take itself lightly, but it’s not over the top in its attempts to shoehorn jokes and references into everything either. Unfortunately, one of the main drawbacks to the story is that it’s incredibly short – no more than 2 or 3 hours, at most.

True to its classic predecessors, everything is mouse-driven – movement, inventory, dialogue, you name it. It’s a point-and-click style that’s simple, straightforward, and effective. Unfortunately, as with most games of the genre, many puzzles come down to simply trying out every item in your bag until something works – so don’t expect too much innovation. But I guess that was never the point to begin with.

Graphics and Sound Tick’s Tales features an 8/16-bit visual style, intended to remind you of the old Sierra games. The graphics suit the game, and are more detailed than you might expect for such a thing. Even the very, very few “hunt the pixel” situations are set up so that the pixel you want to click is incredibly obvious.

The soundtrack is mostly made up of chiptunes. Either you love 'em or you hate 'em. But the ones in this game are pretty decent. The only thing that’s a bit annoying is some of the sounds effects, such as the “dream” sound when Tick imagines his crush talking to him; it's a bit ear-piercing. Aside from that, the music/sounds are varied and reasonable, and they do their job.

Overall, Tick’s Tales: Up All Knight is a pretty good game, and a pleasant way to kill a couple of hours. If you're new to the point-and-click genre, this could be as good a place as any to start. And the characters are there to help you by nudging you on your way, generally without explicitly telling you what to do. And if they don’t, the devs are very active in the Steam forums. (Eric Kei)

Tick's Tales: Up All Knight
Story:
80%
Gameplay:
90%
Graphics:
85%
Sound:
80%
Fun factor:
80%
Atmosphere:
80%
Pros and Cons
Great for fans of classic Sierra adventure games Faithful to the genre style, just modernized
Good writing
doesn't take itself too seriously
You can't actually die
Dev team is very active on the Steam forums, with answers and even hints when asked
Very, very short
Puzzles often come down to trial-and-error
Can get frustrating if you don't “get” the logic that games like this use
No replay value

i can get key 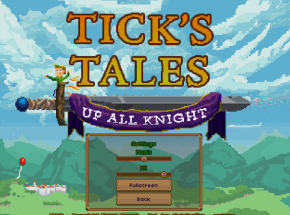