Seasons After Fall is 2-D puzzle platformer game with just a pinch of Metroidvania. You play as a “seed” spirit which, for much of the game, possesses a fox in order to accomplish its goals – namely, acquiring the ability to alter the seasons at will, and using the results in order to solve puzzles.

There are no enemies, and you don't have to worry about dying; this may or may not be your cup of tea – but in the end, this is a good thing. It gives you time to just sit back and take in the gorgeous scenery and hand-painted art style, while resisting the urge to smash your controller against the wall because you missed that one tiny little bug hanging from the bottom of a mushroom which is critical to clearing the current obstacle.

The player character is voiceless – which, for once, makes perfect sense – save for the little yips and barks which you use to control other wayward spirits that you will come across from time to time. Instead, the downtime is filled with frequent running commentary from a caretaker of sorts – an unseen voice which gently nudges you along the path to your destination (without simply spelling out exactly what to do), comments upon random bits of the environment, and gives you warnings about the entities upon whose domains you are intruding.

The first chunk of the game has you gaining the powers of the seasons in order to gain access to new areas, Metroidvania style. Winter causes water (including small geysers) to abruptly freeze, allowing you access to higher areas and making it easier to cross large bodies of water. Spring brings with it torrential rains, raising the water level – which you can then freeze by shifting to winter...etc. Fall causes huge mushrooms to open up, which you can use as platforms. Summer brings everything back to normal. Some plants are only useful during certain seasons, and they all change in obvious ways to help sell the changes. All of this is key to the puzzles, which mostly consist of finding ways around obstacles or gaining access to higher ledges.

Seasons After Fall offers native support for keyboard and controllers (Xbox One wired unit here, no problems at all). The basic commands are move, jump, and bark; once you unlock the ability to manually change the seasons, you do so by holding a shoulder button and selecting the new season via the D-pad

The game does break down a bit once you do have all four seasonal powers, however, as it shifts to pure puzzles with even less hand-holding than before. You end up traversing new bits of mostly the same general areas – which, while they look amazing, tend to wear after a while. The voiceovers do change, which is nice, as the plot gets a welcome dose of thickener. There isn't much story to speak of, save for the charming narrator's breathless excitement as she encourages you to keep on going and gather the needed powers.

The graphics feature some beautiful backgrounds and characters done in a hand-painted style. Each season looks distinct – Winter has snow falling constantly, spring is rainy, fall is full of oranges and reds and yellows, while summer is bright and green.

The music – most of it ambient – is pretty great, too. The voice acting is really well done, and the narrator is charming.

Seasons After Fall is a wonderful, enjoyable game that even makes for a fine screensaver if you just wanna relax and take the scenery in. You can do much worse for the price. I really recommend it. It’s a game that’s never too easy, and never really all that hard – the challenge level is just right, making this a unicorn of sorts: it's a non-violent game that isn't insultingly simple. It’s enjoyable for all ages, without ever feeling insipid. When it comes down to it, three fourths of the puzzle aspect is simply knowing when to switch seasons, and which one to switch to. There is no penalty for choosing wrong, save for having to maybe backtrack a bit or run around to get back to your original position, if you should fall. (Eric Kei)


Seasons After Fall (PC)
Story:
80%
Gameplay:
90%
Graphics:
95%
Sound:
95%
Fun factor:
90%
Atmosphere:
100%
Pros and Cons
Looks amazing
Sounds great (both music and voices)
Solid platforming without any collect-a-thon nonsense
Didn't know foxes could do Samus-style ledge grabs o_O
Not too easy – not brain-thuddingly difficult
There's a plot in there somewhere...
Loose jumps
Gets repetitive after the major hurdle of getting all four season powers is complete
Little to no replay value
Short – maybe six to ten hours long, even for novices

seems to be artistic game. I will be happy to grab it

i want to play this

i want to play this 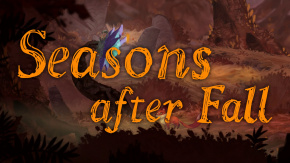