Of Kings and Men

After a long wait and a failed Kickstarter campaign, Donkey Crew’s Braveheart simulator Of Kings and Men is finally in Early Access. Or “pre-Early Access”, as the website claims, although I admit I'm not sure what the difference is. Set in the 13th century, Of Kings and Men is a multiplayer PvP stab-fest where players take on the role of a knight led into a human lawnmower as warring factions try to stab each other to get their point across. Promising massive battles and an in-depth combat system, the game is kind of like playing Call of Duty with swords and horses instead of machine guns and explosives, or maybe a simulator where you get to be William Wallace for a day. A bad day.

As a “pre-Early Access” title, I expected Of Kings and Men to be something of a wreck, but I’m pleased to report that this isn’t the case. While definitely needing polish and some tweaking here and there, the game ran pretty smoothly for me, and I was able to get a pretty good taste of what Donkey Crew is bringing to the table. Of Kings and Men is a nice change of pace from PvP Twitch shooters, where the norm is getting sniped from a football field away by a 14-year-old who knows all the respawn points.

Not that you won’t get sniped in OKAM. The bows are tough to dial in, but once you do, you’re going to be raining arrows on your foes with aplomb. The battles are tight and hectic, with men dying all around you as you parry, attack and defend yourself from the unwashed masses. Luckily, there are already a few game modes implemented in the Early Access version I played, so it’s not just a mindless chop-fest that takes place in the middle of a meat grinder.

Donkey Crew has a system called “The Epic”, which is basically an ongoing conflict between the game’s warring factions. You can help your side “win” by killing opponents, seizing territories and expanding your faction’s power. This sounds simple, but it’s smart to give players some concrete evidence that your single sword is helping to swing the tide of your empire’s advance. Although not implemented fully, players will (eventually) be able to seize and lose territory depending on battle outcomes, fueling a desire for up close murder and mayhem and keeping gamers coming back for more.

There are currently three modes (with more to come) available to Early Access players: Instant Battle, Conquest and Team Deathmatch. Regardless of what you go with, the servers are reliably full (at least when I played), and the jam-packed battlefields ratchet up the tension quite a bit. Battlegrounds are both open and claustrophobic; there would be a ton of room to stretch out if not for the 150 some-odd players brawling it out in close-quarters combat all around you.

The combat in OKAM is more or less what you’d expect from a period game like this one. You have overhand attacks, quick attacks, parries, and defense, and your weapons obviously skew medieval – mainly pikes and bladed weapons. The controls gave me a bit of trouble however, especially during the learning curve phase, which I’m not sure I ever got completely out of. To attack, you click and hold the attack button on the mouse, then move the mouse in the direction you wish to swing, then you release the attack button. It doesn’t sound like rocket science, but with blocking controlled by the mouse as well, things can get a little confusing, especially in a fifty-man brawl. I got the hang of it after a while, but I was still making mistakes after a few hours of play.

It might just be me, but it almost feels like the swordplay would make more sense using a Kinect (but in a good way). The bows and arrows handle beautifully, just about how you’d expect them to, and tagging opponents on the run is a difficult feat to pull off, though quite rewarding when you do. It’s also pleasant to watch a horde of enemies rush you while arrows plunge down in their midst, thinning their ranks by the time they reach you. With so many players sprinting around raging with bloodlust, you really have to keep your head on a swivel, with your eyes constantly on your enemies as well as your allies. Often, I would chase after some straggler and finally slay him, only to realize that I had run well away from my “party” and now I was more or less alone on the battlefield with enemies closing in on all sides. When you’re running with the pack, murdering as one, the game is really satisfying, and the immersion really kicks in.

Success in battle allows you to earn Silver to upgrade and purchase weapons and armor, in addition to leveling up your player. On top of helping your faction expand its sphere of influence, this makes the lethal free-for-all even more exciting and keeps the game from becoming too much of a one-note affair. When you’re rolling with a pack of fellow savages, tearing across the countryside, the game really takes off, and having a serious blade in your hands, earned with the blood of your enemies, makes you feel all the more badass.

The graphics in OKAM could use a bit of more polish overall, but they’re still pretty good, especially considering that the game is still in (pre-)Early Access. Sunlight reflects off armor, trees sway gently in the breeze, and the combat looks smooth. The sound effects really shine too, and it’s a good thing, since the real soundtrack to this game is steel on steel and the wails of the dying.

Of Kings and Men is off to a great start and shows a ton of potential. The battles are fast paced and exciting, running with a pack of warriors is a thrill, and the game looks pretty and sounds great. I am interested to see how the “Epic” system works as a finished product, and how death will function with the weapons and upgrade system. As is, it looks like Donkey Crew has a great handle on this property, and I’m looking forward to checking out the full game.

good ,need for me

i want this game

Of Kings and Men 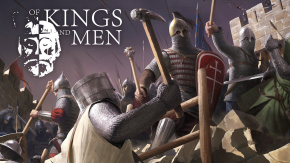