It is time to swing your sword, draw your bow and cast your next spell against endless hordes of goblins and kobolds. Better still, battle down a dungeon that looked totally different the last time you entered it. This and even more features await you in Guardians of Ember, the ARPG MMO, that will consume all your free time this autumn!

The new Hack’n’Slash MMO by Runes of Magic developer Runewaker Entertainment is approaching its Early Access launch on Steam and was presented to the press at this year's Gamescom. The game takes the most prominent features of Hack’n’Slash classics like Diablo and combines it with the beloved MMO elements from Runes of Magic. What has emerged is a great mixture of both genres that we are eager to see more of.

Guardians of Ember is set in the mystical fantasy world of Olyndale, which has been overtaken by dark forces. Humans cling to the last remains of their Empire while Elves hide behind their protective magic and Dwarves, forced to flee their homeland, are now refugees looking for sanctuary. But, the Guardians of Ember are the last line of defense, searching for the ancient Ember to finally bring peace back to Olyndale.

Like a lot of games in the genre, Guardians of Ember starts with you creating your character. At first, you will be choosing your race and class. There’s a total of six classes to choose from: Knight, Ranger, Arcanist, Priest, Engineer and Dark Knight. The Dark Knight will not be available with the Early Access launch due to balancing issues but will be added later during an update. In addition to the primary class, you can choose a secondary class after reaching level fifteen and you will need to level up the secondary class just like your primary. The special thing about this is that your secondary class is not fixed and can be changed without losing the levels of your former class at any time. Of course, the new secondary class has to be leveled up again, but this makes for interesting possibilities for group dynamics. This way, groups of players can change their classes to adapt to the upcoming challenges in the best possible ways, whether it be for a difficult boss or for a raid. There are total of over three-hundred active and seventy passive skills available for you to create a unique hero of your own. Guardians of Ember’s character editor has a range of preset faces as well as head and body sliders which allow you to customize almost every element of your character’s appearance. Before entering Olyndale you will then need to name your hero. Later on you will be able to customize your hero even more by adding costumes you created on your own or bought via the shop.

There is a lot to explore and discover in the over fifty regions of Olyndale has to offer and most of all: Players. Everywhere. Guardians of Ember will have one or more channels for each region of the game, holding up to 100 players at once. Switching channels is simple so no need to leave your friends behind. But it is not only the cities that will be crowded, you will also encounter many players out in the wilderness and that could come in handy when a random world event suddenly occurs! World events are special quests, that are bound to a specific place for a specific time and need players to work together to fulfill them. Most of the time there will be a big boss waiting to slay and raid for all his wonderful loot. With these features, Guardians of Ember promises some very special MMO moments.

Are you looking for more glorious loot? How about one of the over sixty randomized dungeons that can be played at two difficulty levels to match your own playstyle. While playing on easy might be manageable alone, choosing the higher level of difficulty will generate better loot. You should gather your friends before entering a difficult one. But that’s what friends are for after all, right?

To enjoy the company of friends you can always invite them over to your house for a nice tankard of beer or cup of tea. That’s right, Guardians of Ember implements a housing system where you can choose from a range of pre-built layouts that can be filled with furniture and other interior decorations. You want to stick a chair up the frontside of your outer wall? Go for it! There is no grid to prevent you from doing that. Special house spirits are looking for a job and are glad to be hired to brew potions for you. If you’re the green-fingered type, try planting and harvesting your own crafting materials in your personal garden (or pick them in the wilderness).

From Wannabe to Champion

Of course there is more to Guardians of Ember than the PvE action. Besides the questline, you can always enter the PvP Arena for a quick 3vs3 or 5vs5 match or even participate in Horde Mode and see how long you can survive. Duels are also possible, but they don’t require you to enter an arena, just invite your rival directly. It is possible to either compete in ranked matches and go for pole position or simply train by having unranked matches. Guardians of Ember will also come with a guild feature, but no guild matches.

Guardians of Ember will be released as Buy-to-Play via Steam. In addition, the game will include a cash shop. The most important question that comes to mind: Will it be Pay-to-Win, then? We say: No! And this is why: So-called Frozen Orbs will be available to buy through the shop. These orbs will contain the following items at random: mounts, exclusive costumes, furniture for your house, experience and loot boosters, and crafting materials.

Of course, you can travel across Olyndale quicker by using a mount, but there will be free mounts as well and there are always waypoints that can be used for fast travel. Loot and experience boosters may be very convenient and save you some time, but give you no real advantage over players of the same level. And as mentioned before, you can even plant your own crafting materials or find them across Olyndale. A more detailed description of what is coming and why they decided to go down this route can be found in the official Steam forum post from publisher InselGames:

Frozen Orbs will cost 1€ each, which equates to around 100 Frozen Ember. Each Steam version includes different amounts of Frozen Ember from the start. If you have already burned through your Frozen Ember and don’t want to spend real money on more you’ll be happy to know that you can also acquire Frozen Ember via daily quests and achievements.

with this link you get 33% off on IndieGoGo:

Guardians of Ember feels like the love child of Diablo and Runes of Magic as it combines the features we love most from Hack’n’Slash Single Player Games and MMORPGs in a skillful way. I am excited for the Early Access launch and will be looking forward to my personal Hack’n’Slash autumn.

this game is piece of SH!!@T 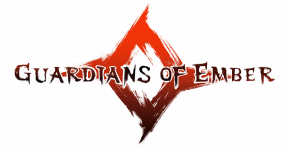