Everyone's favorite Italian plumber is back with all his friends in Mario Party 10. Read our review to find out if the tenth installment in this long-running series is better–or worse–than its predecessors.

What is Mario Party?

First of all, if you're not familiar with Mario Party, you've been missing out. The first game appeared on the Nintendo 64 in 1998 (1999 in Europe), allowing up to four players to duke it out on a virtual game board playing as Mario and his friends–and enemies. The environment is like a normal game board: there's a set path, various spaces you can land on, and each character has their own die. Each space does something; for example, land on on one and you may get three coins, land on another and lose them. There are tons of different kinds of spaces, and each game in the series adds more.

There are always four players, whether human or computer-controlled. At the end of every turn, after everyone has had a chance to roll, there's a minigame. They might have you catching buterflies, running a race, or competing in any number of other events. The player who wins first place gets the most coins, second place gets a bit fewer, and so on. The point of the game is to get the most stars, which you can get by trading in coins for them.

Starting with Mario Party 9, however, players no longer move around the board individually; instead, you're in a vehicle with the three other characters. And the game board is no longer a loop, but rather a linear path with a beginning and an end. You don't collect coins and classic stars to win anymore, either, but Mini Stars. Whoever has the most Mini Stars at the end of the game wins.
These changes haven't been all that hard for Mario Party fans to get used to, but they're not exactly good, either. I, for one, like the older system better.

While you could play up to 50 turns in the older games, the linear path in the latest one means each last 30 minutes, tops. That's not enough time to get a real neck-and-neck race to the finish going, which is a real bummer.

Three Game Modes This latest Mario Party even has three different game modes. There's Party Mode, which is just like in Mario Party 9, where four players compete to see who can collect the most Mini Stars. Then there's also Bowser Party and Amiibo Party. In Amiibo Party, you can play with nine different Amiibos, which will appear as three-dimensional figures if you have the Amiibo, and as 2D "cardboard cut-outs" if you don't. But if you have an Amiibo that's not supported by the game, like Link, Samus, Fox, or Kirby, the game offers a daily lottery for Mario Party points, which you can trade in for things like new vehicles and characters.

Team Mario vs. Team Bowser In Bowser Party, up to five players can play together, Team Mario against Bowser, who is controlled by a fifth player using the Wii U GamePad (the other players use Wii Remotes, of course).

The players on Team Mario each start off with six hearts, and are able to get more by landing on certain spaces. Their objective is to reach the end of the board without losing all their hearts to Bowser.

As Bowser, you have to try to and stop the four other characters from reaching their goal. Bowser has four dice at his disposal–if his first roll isn't enough to get him to the the other players, he can roll a second time, but this one counts. When you catch up with them, this starts a minigame, and if Bowser's lucky, Team Mario will lose a few hearts to him. In order to keep things fair, the GamePad gives Bowser a totally different point of view than the other players have on the screen.

If one of the four players loses all his hearts, they'll have to get out of the car and go back to the beginning and wait. If their teammates end up getting more hearts, however, they can get back on the board. If the team loses all their hearts, Bowser wins.

Just a Few Minutes to Win

In the single-player version of Bowser Party (against four computer-controlled opponents), it usually takes no more than a few minutes to win. I tried it at all three difficulty levels, and it never took me more than seven minutes. This is one place where thy could have done better.

There are a total of four different game boards available, but unfortunately there's no online mode. If they would have just added a few new space-types and retained a few options from the earlier games, it would have been an awesome game. As it is, I can only call it "pretty good".

Now what I did really like were the new minigames, most of whch are really innovative. They really went all out here, and anyone who's played Mario Party for a while is probably used to being pleasantly surprised by creative new minigames.

On the other hand, Party Mode requires at least one Wii Remote, which can mean additional costs for Wii U owners who only have the GamePad.

In terms of sound and graphics, there's nothing to criticize. Like in other Mario Party games, they did a really good job here.

I've been a fan of Mario Party since Mario Party 1, so I was really happy to review the tenth one. Like I mentioned above, I was really surprised by some of the minigames. You never know what awaits you behind the at times odd-sounding names. On the other hand, I'm really not a fan of the main-game gameplay introduced in Mario Party 9. I used to sit in front of the N64 for hours with my friends, competing neck and neck for the next star. You just don't get that experience in Mario Party 10, as the game boards are relatively short, and they never take any longer than 30 minutes to finish. Of course, this game is still worth a look for casual gamers of any stripe. (Dominik Probst; translation by Chase Faucheux) 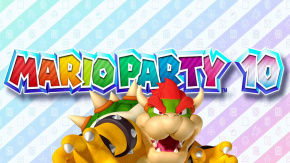