Fans of carefully crafted horror and those who see only in black in white will find in White Night a spine-tingling mystery adventure whose monochrome graphics make it unlike anything else out there. And if you don't like to read, the game's even more terrifying, since not only is the haunted mansion filled with ghosts, but also lots and lots of reading material.

I ain't afraid o' no ghost In 1938, a mysterious accident takes places near Boston, Massachusetts. Seemingly out of nowhere, a little girl appears in the middle of the stret, and the oncoming driver can do nothing to stop the inevitable. In a daze and limping, the unnamed protagonist manages to escape the mangled wreck of his car, but there's no trace of the girl's body to be found. It can't be a coincidence, however, that all this has occurred right out in front of the estate of the Vesper family, which in the moonlight appears to be abandoned. Searching for help, he enters the house, but after a few steps the door latches shut behind him. Locked inside, you have no choice to to try and make your way through the shadowy corridors and pitch-black vastness of the mansion, where terrifying secrets await you, aong with a few surprises, to say nothing of encounters with spirits from the Other Side.

The story spans six chapters, and it takes about seven to eight hours to play through them all, though you'd better like to read if you plan to get anything out of it. There are a good deal of mysterious story sequences in the course of the game, but aside from old photos, what really drives the plot are the numerous and interesting diary entries, letters, notes, and memos found throughout the house. If you find and read all the information, or at least as much of it as you can, you'll figure things out quicker, naturally. This storytelling technique works like a well made puzzle that by the time it's over answers any questions you might have had. The developers deserve a lot of credit here, because it really looks like they thought everything through, and even the ghosts are not just faceless beings, but are intregrated into the story in important ways.

And then there are some really surreal moments in the story that come right out of left field, like when the character suddenly ends up in a completely different setting. These short segments really help to enrich a story that is already pretty bizarre, and give White Night a feel that is at times highly reminiscent of the 90s cult TV series Twin Peaks. But thankfully, the game rests entirely on the chilling atmosphere it creates, rather than heavy-handed shock, placing it comfortably in the tradition of the survival horror classic Alone in the Dark. It uses your own imagination against you to build suspense and fill your head with disturbing images.

A light in the darkness

The gameplay manages to do without combat or action-pecked sequences, instead focusing on well designed, if relatively easy, puzzles. At no point do you have more than one or two objects in your inventory; maybe a key to open doors or some wood to light a fire in a chimney. Pretty much all the brain-teasers rely on the interplay between light and darkness; for example, lots of items are only revealed when the visiblity conditions are right. This isn't always a hundred percent realistic, and sometimes it defies logic, but these kinds of things are fun to figure out in a video game. And in any event, the puzzles don't ever really derail the the development of the plot or hinder it in any unnecessary way.

There are always matches within reach – they seem to be strewn about the villa quite generously, their flickering light offering at least some semblance of visibility in the all-encompassing darkness. And sources of light, however, meager, turn out to be a very important gameplay element in White Night, because without light your character will inevitably succumb to madness. The fact that they only allow you to carry twelve matches at a time seems kind of forced, however. But they're always helpful – after all, you'll miss out on a lot of opportunities to interact with objects and your environment if you can't see what's around you. Electric lights are ideal, but they're few and far between, and only in the rarest of cases do they work right away. There's either a well-hidden switch or a wire lying around that has to be plugged in to the right outlet. When you finally get the bulb on, you can even drive away ghosts, who will disintegrate when you hit the lights, allowing you to access areas that were previously blocked.

Ghostly encounters can be really frustrating, as even the slightest touch of one will rip the player right out of the adventure, and in some places you'll have to go through a lot of unnecessary trouble to avoid them. Luckily there are comfortable chairs located throughout the mansion which you can sit on to save your game. Autosaves are more the exception than the rule, but the beginning of each chapter is always a respawn point in any event, if you happen to die and haven't found a chair yet. At least the fixed camera perspectives, with few exeptions, let you see enough of the area to spot any ghosts wandering around before they spot you. You can use either mouse/keyboard or a game controller, both of which can be customized in whatever way you like.

Perfectly monochromatic, but not perfect

The thing that really makes White Night stand out from other titles in the genre is perhaps the very first thing you'll notice about the game is its graphics style. Entirely in starkly contrasting black and white, the overall feel is highly reminiscent of classic film noir works like The Maltese Falcon or more recent films like Sin City. In any event, this ever-present stylistic device never loses its effect; on the contrary, the clever interplay between light and darkness and well designed environments help to create an atmosphere that is truly menacing. Of course, the game's graphical façade isn't perfect, either, with occasional flickering edges and fluctuating shadows breaking the spell cast by the otherwise immersive atmosphere. And while we're at it, they could have had some shorter load times.

In terms of sound, there's very little to complain about. The sound effects are, like the graphics, rather minimalist, but by no means does that mean they're not effective. The patter of the rain outside, a light gust of wind, or the creaking and groaning of the great house's rafters – each one is a tasty acoustic morsel. The background music is no less discreet, gravid with piano and jazz elements, an appropriate backdrop for the ominous atmosphere. The deep voice of the narrator is available in both English and French, but other languages will have to rely on text and subtitles (German, Spanish, Italian).

White Night really surprised me, but in a good way. This dark and mysterious adventure does without combat and action; instead, it's an experience that feels like a suspenseful, playable book. And honestly it doesn't really matter that the puzzles are relatively simple, since they still really fit in well with the game as a whole. Horror fans can go ahead and light a candle, turn down the lights, and enjoy this game to the fullest. (Christian Schmitz; translation by Chase Faucheux) 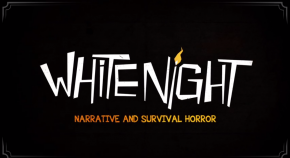