Zombie Army Trilogy is a third-person tactical shooter with zombies, from UK-based studio and publisher Rebellion. The game is divided into three parts, the first two of which are remastered versions of standalone DLC for Sniper Elite V2. The three parts are all connected, of course, and build on one another.

The first part begins in May 1945, in an abandoned village not far from the German capital of Berlin. World War II is in its final stages, and even Adolf Hitler himself is forced to concede that the war is all but lost. As a last-ditch option to achieve world domination, the Nazi dictator unleashes a zombie army, which the player spends the rest of the game fighting. From the zombie-infested village where the story begins, to the beleaguered capital, the three playable main characters fight through a variety of missions until they reach the library. This is where the search begins for a medieval occult book known as the "Book of Souls", which is supposed to be able to stop the zombie hordes. The first part of Zombie Army Trilogy ends with a final showdown in the tunnels of the U-Bahn, which the player must traverse in order to get out of Berlin.

The second part sends you back to Berlin, after a brief introduction, where the army of zombies continues to grow unchecked. Hitler has since lost control over the undead hordes, becoming a zombie himself. In order to get the situation under wraps, the main character must be ready to slaughter wave after wave of zombies until he arrives at the Führerbunker itself in the middle of the city, where he hopes to recover a part of the powerful Sagarmatha Relic and put and end to the zombie advance once and for all. The search for the rest of the mystical artifact also involves gunning down tons of undead Nazis.

The third and final part of the trilogy takes you back to the German capital yet again. This time, the city has been bombed repeatedly by the Allies, and the majority of it lies in ruins. The hero must fight through narrow U-Bahn tunnels and dark and gruesome forests before reaching the Folterschloss, Hitler's mountain fortress. Thus begins the grand finale, where the player must defeat Hitler himself in zombie form.

Tons of zombies and lots of different locations (Gameplay)

From the very beginning of the game, you're able to select any of the available missions and play them in any order. You can even skip back and forth between the three parts of the trilogy. Because of this, it's not so bad when you simply can't get past a certain spot, since you can just skip to the next level, regardless of whether you've beaten the one before it. Each level allows you to choose the difficulty level as well as the character you want to play it with. The character menu incudes eight different skins: four male and four female. Each character has their own short bio, which allows you to quickly decide which one you identify with the most.

Before starting each level, you get to decide which weapons you want to take with you. There are three weapons slots: your primary weapon (usually a sniper rifle), a secondary weapons slot (e.g. shotguns or submachine guns), and a pistol slot. There are also several different kinds of grenades and mines you can use. In the course of each mission there are secure locations where you can refill your ammo or change out your weapons. Of course, the zombie soldiers you dispatch also drop ammo that you can pick up. Be careful, however, since the bodies disapear after a very short time, taking all the items they're carrying with them to zombie Nirvana, so you have to hurry. Overall though, there's a really generous amount of ammo to be found in Zombie Army Trilogy, so missing a shot or spraying bullets is not such a big deal. This makes it different from games like Far Cry, where you're forced to ask yourself if you really have to take the shot or not.

If you've played other zombie titles recently, you know there are always several different kinds of enemies, and that there are different ways to kill each one. Things are no different in Zombie Army Trilogy. Alongside classic video game zombies, you can expect to find stronger and faster varieties as well. There are even zombie snipers and summoners, who can only be killed with a headshot. Another thing that adds to the variety of enemies in Zombie Army Trilogy are the occult symbols that pop up all over the place in the game. Zombies that are close to these symbols are harder to kill, and can even come back to life after you kill them. This is something you should keep in mind if you don't want to keep getting killed from behind by zombies you thought were aleady dead.

The game features a wide variety of settings in the course of the three parts, taking the main characters to several different places, each with their own atmosphere, from narrow U-Bahn tunnels to abandoned towns, to eerie forest environments. What each of these locations has in common is a consistently dark atmosphere, resulting in a convincing overall impression. There is one complaint I have when it comes to level design, however: it's true that you're able to enter lots of different houses and other buildings, but more often than not, they turn out to be empty shells that don't allow you to do anything interesting, and only in the rarest of cases do you find some ammo or something in one of them.

The variety of locations unfortunately stands in stark contrast to some pretty monotonous gameplay. In the course of the trilogy, gameplay is limited almost exclusively to killing hordes of zombies one after another, without any real need for tactics or planning. And on top of this, sometimes there are so many of the damned things that even when you've got it set at the lowest difficulty, you still have to keep repeating the same mission over and over again. Over time, this can get really frustrating, which really limits the game's long-term motivation. There are a few situationss within certain levels that break away from the typical pattern and provide for some rare gameplay highlights, such as classic sniper segments or parts where you have to survive an ambush or defend against a mass attack. Another shortcoming of the gameplay in Zombie Army Trilogy is the lack of a melee weapon. Lots of times you find yourself in a situation where the masses of zombies are so close that it's hard to hit them using firearms, especially when you have to keep reloading. A melee weapon like a simple knife would be really helpful in that kind of situation, but unfortunately the developers didn't see fit to add one. Of course I should mention that you can actually kick the zombies if you have to.

Beautifully dark (Graphics) The surreal graphics in Zombie Army Trilogy do set it apart from your average shooter. The various landscapes and locations appear to be part of a dark and mysterious dream, despite the game's "historical" subject matter. Zombie Army Trilogy doesn't try to win you over with realistic details, and the resulting atmosphere is a haunting one, striking in its overall vividness. And each different location, whether in the city or out in the forest, has its own feel, making the transition from place to place very interesting in depth and variety.

As far as sound designed is concerned, the minimalistic background music does a great job of reinfrcing the game's atmosphere, perfectly harmonizing with the mysterious aura of the game's locations. It's for the most part really restrained, yet it still manages to create a certain sense of unease at all times, which tends to have a subliminal effect on the player. The zombie sounds are also well done and fit in well with the environment, though the developers sould have been a bit more creative here and added a occasional departure from the undead moans and groans, which tend to get repetitive, and obviously so. And while its understandbale that all voiceovers are in English, it's a more than a bit weird that even Hitler and his cronies use English, even when talking to each other.

The graphics in Zombie Army Trilogy make it a pretty impressive and interesting game, as does the atmosphere they've managed to create with the appropriate background sounds and extraordinary visual elements. Unfortunately. the gameplay is for the most part pretty monotonous, with only slight variations like the occasional classic sniper segment. This has a negative effect on the game's fun factor in the long run, and the at times super-high difficulty can be pretty annoying in single-player mode, forcing you to replay missions over and over again. Classic shooter fans will nevertheless still find a lot to like about Zombie Army Trilogy. And the multiplayer mode, which allows you to step into any level at any time to help out your online allies, is something that should really satisfy the target audience. But it's really not much more than a shooter in the literal sense, so don't expect much else. (Daniel Walter; translation by Chase Faucheux)

can i have the steam key please 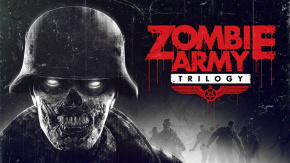