From Louisiana studios Dark Seas Interactive and Pixel Dash Studios comes Road Redemption, an epic motorcycle combat game inspired by Road Rash. Road Redemption has been given the Green Light by Steam and is currently available on Steam Early Access. Full disclosure: I was previously associated with one of the studios working on this game but was not involved with this project at all.  Read on to find out just how fun the ragdoll physics, unique weaponry, and intense yet comedic combat make the gameplay great.

Storyline The storyline is pretty basic and vague, but that’s ok because all you care about is clobbering other cyclists with a tactical ax, right? Basically you and your motorcycle gang are on a trip across the country with the simple goal of making it to your destination and completing the last mission. That’s it. You can pick which character you want to play, as and the only other named entities you’ll come across are the names of other gangs or the people you destroy on the road. You’ll see their name briefly as you finish them off. Some of the names are those of developers or Kickstarter contributors who contributed enough to get a character named after themselves in the game (you can still do so on their website).

Gameplay As you make your journey on the road, Road Redemption will quickly soon have you recalling games like Starfox 64…you are going to have to finish the game off in one straight run from start to finish in order to complete it. Once you die, it’s back to the beginning with you. The good news is that you can use the experience you earn from each run to purchase permanent upgrades and rewards. These are going to be your key to winning the game. There are missions you will have to do at random, such as racing to the finish, defeating a certain number of rivals, defeating rivals using only kicks and grabs, racing a rival gang, and attracting the attention of the police. Sometimes weird and interesting things will happen like the traffic going crazy, or bombs will explode in the middle of the road.

In general there's always some car traffic to avoid and some other bikers that will try to get a swing at you when it's convenient. You carry out missions alone, though. I occasionally came across bikers that were in my gang, but I only found that out after accidentally hitting them. Mostly they just ride with you, if they're even there. It's fairly easy die if you're not completing the missions successfully. Completing the missions gets you cash, which gives you the opportunity to buy food, among other things, to replenish your HP. Without enough cash to buy food, you won't last for too long, as you'll be taking damage from other bikers fairly often, especially when you get caught in a large group of them, and also when you hit obstacles while moving at a decent speed. You'll also run into a fair number of police along your journey, though their role is not clearly distinct from the other bikers, as they tend to be just as aggressive.

The weaponry in this game is unique. You’ve got bats, clubs, hammers, giant wrenches, tactical axes, battle axes, swords, knives, harpoon guns, guns, grenade launchers, available to you once you get to them. You can also get C4 explosives. Using that for the first time was quite an exciting experience and I kind of think of it like getting candy when I get more C4. You are able to hold 4 weapons at once and can switch at any time, and can also obtain weapons from your opponents. Because some weapons can be aimed, the control scheme is like a combination of racing and first person shooter, using both mouse and keyboard when not playing with a controller. Without a controller, it can be a lot to keep track of at times and you may find yourself tapping around a bit for the hand brake, deflect, and kick buttons. In addition, without the controller you’ll have to tap the steering buttons in order to make a turn somewhere between the minimum and maximum turn radius. Occasionally I found myself wanting a button to glance backwards, which is not currently available.

The game has some unique courses to play on, including a rooftop and, at the end, a harkening back to Mario Kart 64’s Rainbow Road (it’s okay, it’s not a spoiler because it’s in the Steam achievements list!!!). It took me a solid 12 hours of playing to get to the end of the Early Access campaign mode and I can definitely say that getting to Rainbow Road was pure nostalgia-filled joy. Some other fun features in this game are the "jumplets" (little rocket boosters), which are useful for rooftops or jumping out of harm’s way; nitro for speed boosts; and the harpoon gun, which is difficult to master but can give you a great advantage if you use it right. For Halloween last year, the developers pushed out an update that added a flaming Jack-o-Lantern-headed character, and around Christmas you could be biker Santa Claus.

Graphics and Sound There is a lot of attention to detail in this game, from the movement of characters to the details of their appearance, even though you’ll only be looking at their backs. When it was first released, there were some lag issues, but updates have brought steady improvements in the game’s performance, and given that it’s in Early Access, I'm not going to fret fret over it. With higher video quality settings, the textures look great, but less-than-cutting-edge computers will probably have a hard time keeping the gameplay smooth, so I'd recommend sticking to lower quality settings if your machine is a few years old.

The physics in the game are pretty pleasing – giving someone a good whack just looks right, and going limp when you fly off your bike can be pretty comedic looking. The bike physics seem right – you shouldn’t be able to make a tight turn without slowing down or using the handbrake, etc.

The sound in Road Redemption is interesting. This game has been reviewed multiple times by YouTube’s most subscribed channel, PewDiePie, and you’ll find that the music is the first thing he...both enjoys and makes fun of? Personally, I like the music because there are certain pieces that make the game feel either dramatic, or comedic, or intense, and I enjoy the variety. I do know that for the genre and the gameplay that there should probably be more hard rock or metal going on, and I know that some of the developers are pushing for that. The sound effects also make using the weapons very satisfying and not too repetitive.

Road Redemption is an Early Access game, and I trust that most of the hiccups here and there will be dealt with by the time of the full release. One thing I forgot to mention above is that there is a multiplayer mode, but currently you have to be playing on the same machine. They are eventually planning to implement an online competitive mode, though. Road Redemption is available on Steam Early Access for PC for $19.99 and overall, I think it's priced decently and worth checking out. (Ed Lynch)


Road Redemption
Story:
70%
Gameplay:
95%
Graphics:
95%
Sound:
90%
Fun factor:
100%
Pros and Cons
Some really great courses
Fun weaponry
Random events can be a lot of fun
Not many courses as of yet
Controls can be difficult using keyboard and mouse
Currently no button to quickly glance backwards 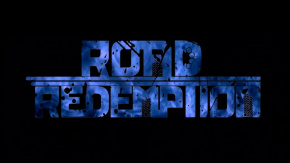