Grim Fandango Remastered is a new edition of the critically acclaimed LucasArts graphic adventure from 1998, bringing the classic game to the latest generation of consoles. Players take on the role of the late Manny Cavalera, who works for the Department of Death (DOD) in El Marrow as a travel agent, hoping to one day pay off his debt to “the powers that be” and make the journey to the Ninth Underworld, the final resting place for souls. In the world of Grim Fandango, only those who have lived a good and honorable life on earth are permitted to take the “Number Nine” express train to their final destination, and the rest of the poor souls must journey through the Land of the Dead on foot, or like Manny, take on jobs and work to pay off their debts. Manny earns his…living by selling travel packages to the recently deceased and collecting commissions on each one he sells. Of course, the better life someone has lived, the more luxurious a journey they can take, and the bigger Manny’s commission is. Unfortunately for Manny, he keeps getting clients who’ve led such wretched lives that all they can afford is the four-year journey through the Land of the Dead on foot.

Even when there’s a big order, which happens now and then, Manny’s still only able to get his hands on the less-than-spectacular souls. The “glamorous” souls, the “rich” ones, always seem to go to his fellow travel agent Domino, who has not only taken over Manny’s old, spacious office, but also enjoys the full support of their boss. Manny is frustrated with his job and is starting to smell something fishy. Since all the “good clients” seem to be passed on to Domino, Manny rigs the system that assigns recently deceased souls to travel agents. This is how he comes across potential client by the name of Mercedes Colomar, whose files indicate she led an exemplary life on earth. Anticipating the big fat commission he’s going to get from a client like this, and the recognition from his boss he’s longed for so long, Manny and his friend, the speed demon Glottis, go out to get Mercedes and bring her back to DOD headquarters, where Manny plans to sell her a spot on the Number Nine luxury express train and reap his own rewards. When they get to Mercedes, who goes by the name “Meche”, and Manny lays eyes on her for the first time, he immediately falls head over heels in love with her. Back at DOD headquarters, Manny starts trying to book Meche’s trip, but there are unforeseen complications – the computer indicates that Meche is not qualified for the Number Nine and must make the four-year journey on foot. While Manny is arguing with is boss over this obvious glitch in the system, Meche decides to set out on foot to the Ninth Underworld, seeing as there is such a long journey ahead. On top of everything else, Manny’s boss catches wind of his little trick, and Manny is locked in a utility room. In the meantime, his nemesis Domino is tasked with tracking down Meche and bringing her back to the DOD.

While Manny is wiling away the hours in his solitary confinement and doubting his very existence, he receives a visit from a certain Salvador “Sal” Limones, who helps get him out of his hopeless situation. Sal informs Manny that the DOD has been rife with corruption for some time, and that his revolutionary organization, the Lost Souls Alliance, is close to obtaining enough evidence to reveal the corrupt underbelly of the company once and for all. Since the LSA needs Manny’s help gaining access to the DOD’s computers, Manny is quickly made a new agent in the secret organization, which turns out to be made up of no more than two other people besides himself. After completing a few minor tasks for Sal, Manny finally gets the chance to leave town and start searching for his beloved Meche.

In the course of Manny’s journey, he meets up with Glottis once again, who's been unemployed since his role in Manny’s scheme was discovered. Not only does he meet up with old friends, he also ends up running his own casino at some point and later spends some time at sea. And throughout the story you learn about the boss of the criminal underworld, Hector LeMans, who is the mastermind behind all the machinations going on inside the DOD.

Diverse locations and solvable puzzles (Gameplay): In terms of gameplay, Grim Fandango is a classic point-and-click adventure game, though to those of us who’ve grown accustomed to the latest generation of games, some things might seem a bit odd at first. In contrast to more recent titles in the genre, Grim Fandango doesn’t give you the option of highlighting only those items you can interact with. This means it sometimes takes a little while before you know which items in a particular location can even be used, and which ones are just for decoration. But since your inventory will contain relatively few items throughout much of the game, it usually doesn’t take very long to find what you’re looking for. Overall, the puzzles you come across shouldn’t take too long to solve for most point-and-click adventure fans, though a few of them, like the puzzle with the pumps in the Petrified Forest, don’t seem to follow any sort of discernible logic and can only be solved by trial and error. Puzzles like this have the potential to bring less experienced point-and-click adventure fans to the point where the game rapidly starts losing its appeal. And so I can’t really recommend Grim Fandango as a gateway drug into the world of puzzle games.

Numerous changes of scenery and a mixed bag of different locations help to ensure a wide range of variety in the setting of Grim Fandango. You can explore the DOD office building where Manny works, even go on the roof, or visit places like the Petrified Forest or Manny’s Casino, all of which are highly detailed and brimming with atmosphere. The various characters, who also interact with one another when you’re not moving, breathe life into the scenes and provide background comedy. Manny’s running commentary on nearby objects and characters, as well as the content of the dialogue itself, should keep you grinning throughout the game. Brief excursions that deviate from the normal gameplay also help add a bit of variety from time to time. When Manny gets a chance to take a joyride in Glottis’s car through part of the forest, he’s not the only one who’ll be enjoying himself.

For the most part, they did a really good job of porting the classic PC controls to the PS4. Every now and then, though, like when you’re in a room and the camera perspective switches back and forth multiple times and you have to keep turning the analog stick in different directions, it’s obvious that the game was originally designed to be played with mouse and keyboard. This happens very rarely, though, so it’s not like it’s going to diminish the fun in any way. Throughout the game you always have the option of controlling Manny with the analog stick or with the D-pad for a more classic feel. No matter which one you choose, the controls are surprisingly intuitive, which is anything but a given when porting a point-and-click adventure game to a console.

Unlike most current games, Grim Fandango has no autosave feature, though you are free to save your game whenever you feel like it. On the one hand, this is a good thing, but on the other hand if you don’t remember to save your game regularly you can lose hours of gameplay if there’s a power surge or something.

The graphics in Grim Fandango are definitely worth a look, even though you can’t really compare it to current titles. Of course, the characters’ simplistic, almost rigid facial expressions always lent this game its own peculiar charm, and it still works even today. In contrast to the characters’ facial expressions, locations are designed with great attention to detail and full of little things you won’t notice the first time around. The graphics options allow you to choose between a 4:3 and a 16:9 aspect ratio, with the latter making the image look stretched out and little distorted. The 4:3 format leaves borders on either side of the screen, but though it might be kind of strange at first, it doesn’t take very long to get used to it.

Experimental jazz sounds (Music): Grim Fandango offers a good deal of variety in terms of music as well. There are rhythmic tango pieces that highlight the game’s overall Latin setting, but the innovative soundtrack is dominated mostly by several different jazz and swing pieces. The music changes according to where you are in the game, and is designed to fit each location. For example, the Petrified Forest features a somber orchestral theme, whereas the little marketplace in El Marrow is brought to life with a kind of upbeat carnival music. In this way, each location has its very own atmosphere, which provides for an immersive experience.

But even here, not everything is perfect. The music is ever-present throughout the whole game, which for the most part is not just not annoying, but actually helps make the game even more enjoyable. But sometimes when you’re trying to solve a difficult puzzle, like the pumps I mentioned above, and you’re getting nowhere with it no matter how many times you try, the rather prominent jazz music in the background can get a bit nerve-wracking.

All in all, Grim Fandango Remastered should satisfy the heart of any fan of classic adventure games. The puzzles can be a bit tougher than usual, but for the most part they follow a certain logic and shouldn’t take too long to solve. Some of them require a good bit of persistence though, which means that this game is not really one for newcomers to the genre. The remastered graphics and the somewhat different PS4 control scheme mean that fans of the original game will enjoy going back and playing through this exciting and whimsical story once again. The lively setting and the wide variety in the soundtrack are just two more things that make the latest version of this classic game absolutely worth playing. (Daniel Walter; translation by Chase Faucheux)


Grim Fandango Remastered (PS4)
Story:
88%
Gameplay:
79%
Graphics:
85%
Sound:
80%
Fun factor:
89%
Pros and Cons
Innovative, exciting storyline
Remastered graphics with a charm all their own
Puzzles are for the most part logical and solvable
Some puzzles can only be solved by trial and error
Changes in camera perspective can be disorienting 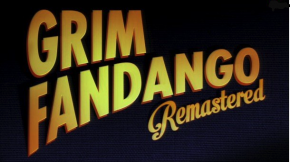