Saints Row: Gat Out of Hell

Saints Row: Gat out of Hell (Xbox One)

Saints Row: Gat out of Hell was released as a standalone expansion to 2013’s Saints Row IV, which means you don’t need to own a copy of Saints Row IV to play it. The PlayStation 3 version and the Xbox 360 version were released via the Play Station Network and the Xbox Games Store. For Xbox One and PlayStation 4, there’s a bundle including the next-gen console versions of the game and the Gat Out of Hell digital content called Saints Row IV: Re-Elected.

Kinda hot in here, ain’t it?

Satan, for all his pure, unadulterated evil, is apparently a father who just wants to look out for his children, and wants his sweet little Jezebel to have a man who is just as evil as she is. He finds the perfect candidate for this in the Boss, leader of the Saints, who has really has raised a lot of hell on earth. Satan decides to drag the Boss down to hell and force him to marry his little girl, but his plan didn’t account for loyal Saints Johnny Gat and Kinzie Kensington, who set off to get the President back, destroying everything in the way. Over-the-top action and twisted humor are guaranteed. There’s even a musical number, which is at the same time as surprising as it is entertaining.

Of course, not even a Saint can go up against the Prince of Darkness all alone, so in the course of the game you’ll find allies in former enemies like Dane Vogel and Kiki & Viola DeWynter, as well as an eclectic bunch of historical figures including Blackbeard, Vlad the Impaler, and William Shakespeare. You win their loyalty by completing tasks for them, and they will help you in battle against the Horned One.

And if you don’t feel like playing alone, there’s also a 2-player co-op mode that allows you to invite a friend to face the forces of the damned along with you, or get matched up with a random player anywhere in the world. Unfortunately, this mode is only available online, meaning you can’t play on a single console.

While Saints Row: The Third and Saints Row IV allowed you to create your own character, the only choice Gat out of Hell allows you is whether you want to play as Johnny or Kinzie. The gender difference doesn’t really matter much, however, since both characters have the same weapons and the same skills. One of the game’s major new features is that both characters sprout wings while they’re in hell, allowing you to soar right through the city of New Hades, allowing you to explore not just the streets of the city, but the heights above. The only drawback is that this new mode of travel renders vehicles (almost) useless.

The flight controls do take a bit of getting used to at first, but after exercising your fingers a bit, you should learn quickly. The rest of the controls, like for shooting or for using your Arcane abilities, work really well and are easy to learn after just a few minutes of gameplay – they’re not all that different from the controls in other action shooters.

Even demons like to have it out every now and then

In the course of the game, you can level up your character and upgrade their weapons using the Wages you earn and the Soul Clusters you find, making you stronger and faster, your guns even more wicked, and you Arcane abilities even more powerful. Soon, even the tougher enemies shouldn’t be too hard to take out. In addition to Demon Grunts, which are actually pretty easy to beat, there are also Arch Dukes, Dark Inciters, and other demonic entities that will give you a bit more trouble. The Saints will even have to face Professor Genki from with his white lab coat and his giant pink cat head, who you’ll remember from The Third and Saints Row IV.

New Hades looks just like you might imagine the underworld should look. Burning houses, hordes of demons, blazing infernos, and rivers of lava. You’ll quickly notice, however, that the game world is actually kind of monotonous and boring-looking. The streets are populated by tons of clones of the same creatures, the vehicles driving around offer very little variety, and few of the buildings really stand out. It only looks good when you start making things blow up or start firing off the oddball special weapons and using your Arcane abilities to make some real fireworks. The special weapons in Gat out of Hell are based on the Seven Deadly Sins: a recliner outfitted with powerful miniguns represents the sin of Sloth, Uriel’s Edge stands for Envy, and the Boom Chicka symbolizes Lust. You can also use your Arcane abilities to stomp your enemies or summon demonic creatures of your own to fight for you.

Gotta get it all

The game map is divided into five areas, all of which offer numerous side quests and collectible items in addition to the main quest missions. Most of these side missions, however, are just the same kinds of missions from Saints Row IV, but with a hell theme. One kind has you master flight/parkour tasks, and another kind has you wreak as much havoc as possible in a set amount of time. There are also towers that have to be taken out and “extraction facilities” to take over. The only problem is that the missions can get too repetitive, and even the main storyline sometimes just consists of a string of these minor missions.

The main storyline takes about three hours to complete, but if you want to complete everything or run up your Gamerscore as high as possible, there are enough things to do that will drag the game out to 15-20 hours or so. Just trying to collect the 940 Soul Clusters scattered throughout New Hades should take a few hours in itself. There are also Audio Tomes, aerial acrobatics mini-games, and Blackbeard Glyphs that unlock chests.

Saints Row: Gat out of Hell has proven with its quirky and over-the-top gameplay that it can be a hell of a lot of fun to use ridiculous weapons to shoot everything in sight and to complete thoroughly twisted storyline and side missions. There’s also a ton of things to collect, which can extend the game time.

On the other hand, the graphics in Gat out of Hell are nothing to write home about, and the design of New Hades is pretty monotonous. But the game’s impressive voice actors do supply more than enough comic relief – there’s even a musical number. If you like the other Saints Row games, you’ll have fun with this one, especially in co-op. (Anja Schmidt; translated by Chase Faucheux)

Hello, please give me a Steam key, send

Saints Row: Gat Out of Hell 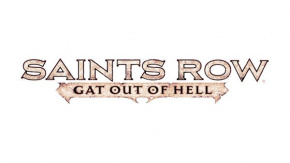