The third installment in the Lego Batman series once again has you fighting through various settings all over the DC Universe – from Gotham City and the Justice League Watchtower to expeditions into space and to Oa, headquarters of the Green Lantern Corps. For the most part, the story is related via cut scenes taking place between levels – the dialogue between characters in the game itself is played mainly for laughs. Along with Batman and Robin, the main characters in the first Lego Batman game, you can also control lots of other DC heroes including Cyborg and Wonder Woman, and villains such as the Joker and Lex Luthor.

In the game’s introduction, members of the Lantern Corps assemble in space, where they have been summoned by and unknown force. A few minutes later you find out that it’s actually an ambush engineered by the Superman villain Brainiac, whose diabolical plan requires power rings from all the colors of the emotional spectrum. Brainiac soon realizes, however, that Hal Jordan, aka the Green Lantern, has not heeded his call, and is back on the moon at the Justice League Watchtower, oblivious of what’s just happened. Brainiac needs all of power rings to shrink down planets and add them to his collection. So, Brainiac sets a course for Earth in order to retrieve the Green Lantern and follow through with his plan.

Back on Earth, Batman and Robin have their hands full dealing with the Joker and other bad guys, who have escaped from Arkham and are now working with Lex Luthor to steal the schematics for a fusion cannon so he can use it to hold the world ransom and make himself President. With the help of their Justice League friends Cyborg, Flash, and Martian Manhunter, Batman and Robin manage to thwart the villains’ plan and imprison them in the Watchtower. At the same time, however, Brainiac launches his attack on the Justice League, and is able to take control of Hal Jordan, forcing the Justice League to join forces with their erstwhile nemeses in order to prevent Earth from becoming part of Brainiac’s collection of miniature planets.

The rest of the story contains lots of unexpected (and funny) twists and turns, including changes in character for some of the figures, thanks to the influence of the power rings.

In contrast to Lego Batman 2, the developers decided to forego the open-world setting in favor of the kind of gameplay seen in earlier Lego games – solid games like the first Lego Batman and the Lego Star Wars series, which featured well-structured, level-based gameplay. This means you no longer have to spend several minutes running back and forth through Gotham before you can start the next mission, which could get pretty annoying sometimes. In addition to that, self-contained levels means it’s easier to move back and forth between locations, allowing for a wide variety of settings.

Another new gameplay feature is that you only have to unlock new suits once, and then you can use them at any time to give characters like Batman and Robin special abilities. In the first Lego Batman, you could only change suits in special areas. And in this installment, it’s not only Batman and Robin who can be equipped with different suits, but also characters like Cyborg and Lex Luthor. Unfortunately this can get a bit confusing though, since you sometimes have to switch back and forth between not just different characters, but also between individual suits for each character on top of that in order to make it through the level. And all the more so because your party isn’t limited to two characters like in the other games, but can sometimes consist of up to five heroes and villains, each one with his or her own special abilities.

In addition to old favorites like Robin’s Magnet Suit and Batman’s Sensor Suit, Lego Batman 3 introduces some cool new suits like Robin’s Illumination Suit, which glows in the dark, or Batman’s Space Suit, which allows him to fly and is also equipped with a laser that he can use to cut through gold Lego bricks and melt ice. You can’t use all the new suits indefinitely however, and many of them require you to reload them with batteries or fuel cells at special stations. In itself, this is a pretty good idea, but sometimes when you’re dealing with a bunch of enemies coming at you at once it can also be kind of frustrating to have to worry about whether you’re going to run out of fuel cells or not.

Adding a bit of variety to the classic Lego gameplay are some really fun missions where you get to fly classic Batman vehicles like the Batwing through space. And within each of the levels, there are always mini-games to solve – the most common of these is probably when you use Robin’s Techno Suit to crack codes in order to open certain doors. These mini-games have you take control of two little robot characters (who actually look a lot like French electro-pop duo Daft Punk) to master various retro-arcade style challenges.

If you get stuck somewhere, there are lots of things to help you get back on track. Of course there are always the light blue Lego bricks that show you which way to go if you get lost, but this game also introduces another little helper – Bat-Mite, who can be called by activating little bat symbols that show up from time to time. Not only does he provide you with tips about the basic controls, but he also explains the various functions of all the suits available to you, which can be hard to keep track of. Since Bat-Mite, who considers himself to be the greatest Batman fan ever, never shows up on his own, but has to be summoned by the player, he’s a new feature that can be really useful if you need him, and that can be safely ignored if you don’t.

Some of the levels can be extremely long, so you’d better be ready to put in some time if you want to make any real progress on the story. While the levels in the Lego Star Wars and Lego Harry Potter series could easily be completed within half an hour, it can take a whole hour or so to finish a level in Lego Batman 3. Each of the 15 levels is divided up into several different areas, and you can save your game whenever you finish one of them, though sometimes you might find yourself wishing the level would just end, as some sequences can get pretty tedious. Then again, even if this does take away a bit from the game overall, I should mention that the levels are very diverse and really well-designed, so they’re always pretty entertaining.

Fans of the Lego games will be happy to know that you once again have the chance to collect various Lego bricks and Minikits while you’re out saving the world, which you’ll need if you want to get that coveted 100% completion. Since it’s highly unlikely that you’ll find them all on your first run through a level, any level can be repeated in free play mode with whatever character you feel like playing with. Any character that appears in the game’s storyline mode can be unlocked by picking up the corresponding Character Token and purchasing them in the character menu. As a little nod to Batman fans and superhero fans in general, each level has an “Adam West in Peril” segment where you have to rescue the classic TV actor from a sticky situation. And like in previous games, this game once again has a co-op mode allowing a second player to join the action at any time.

The background music is for the most part made up of orchestral arrangements that call to mind classic Batman themes. The quality of the music is so high that it could easily fit into  Batman movie, even without making any changes. The extravagant music is more reminiscent of the atmosphere of the more recent Batman movies than anything else, and sometimes it can even come off as too dark and heavy when you consider that the characters running around on the screen are Lego figures. Nevertheless, the composers and sound designers did a very good job on this one, creating a fist-class backdrop of sound for the action to take place in. The orchestral instruments are joined by electronic beats and synthesizers in the mini-games, adding a futuristic touch that goes well with the little robot characters.

As with any Lego game, no one should be expecting there to be any quantum leap in graphics here, but Lego Batman 3 doesn’t need it, either. Each of the fifteen levels looks great, and the various locations from the DC Universe have all been designed with a meticulous attention to detail, including the Batcave and the sewers beneath Gotham City, making it so that comic book fans should feel right at home fighting through the story with their favorite heroes. The typical colorful, cartoony style of the Lego games will often be a source of comic relief, and the cut scenes also fit in well with the game’s overall graphical style.

All in all, it’s pretty clear that Lego Batman 3: Beyond Gotham does many things a lot better than its predecessor. Scrapping the open world from the second game makes for better transitions between the individual levels, and the numerous changes of location as well as the flying missions and the mini-games ensure that the game is full of variety and always really entertaining. Admittedly, at times the entertainment factor can get a bit lost in some levels that are just way too long, but overall the game really is a lot of fun. The highly-detailed locations and first-class sound design help to create an authentic comic-book atmosphere, and the various cut scenes serve well in advancing the game’s humorous storyline. So despite a few weaknesses in gameplay, I can safely say that anyone who enjoyed previous Lego games will find Lego Batman 3 to their liking as well. On the other hand, those who really liked the open world in Lego Batman 2 might miss that gameplay aspect in this game. (Daniel Walter; translation by Chase Faucheux)

please ı need this game
My mail : 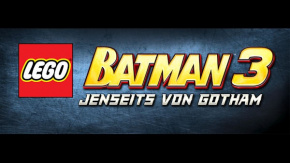