Toad, everyone’s favorite fungal friend and long-time companion of the world’s most famous Italian plumber, has gotten a new game of his own: Captain Toad: Treasure Tracker. And you’d better believe his female counterpart Toadette is along for the ride, too. Keep reading to find out if this latest adventure from Nintendo is worth buying or not.

The game begins with a shot of the treasure hunter Toad, who is looking for a Star. After this the first level comes into view, and you see Toadette approaching the Star. Suddenly, a huge bird appears out of nowhere and snatches the Star, along with Toadette. Now it’s up to you to get the Star back, and to save Toadette too, of course. The adventure is full of nasty bad guys, tough puzzles, and a variety of objects to collect. The story’s really short, but that’s no different than most games in the Mario universe.

The whole world in Captain Toad: Treasure Tracker is made up of squarish blocks, in a way that allows you to get a good view of the action, which I thought was pretty cool. The goal of each level is to find the Star, and each level is filled with items that will help you get there. You can pull up turnips from the ground and throw them at your enemies, or you can throw them at hard-to-reach coins in order to collect them. You can also use Warp Pipes to get from one end of the level to another. And then there are switches you can activate that do all sorts of things.

They did a good job of integrating the Wii U’s versatile GamePad into the game. You can use it to move certain blocks back and forth, blow into it to get rotors moving, or use it to aim turnips at your enemies. You can also move the Gamepad to rotate the camera around your character, or just use the D-pad or the right stick.

You start off with exactly two lives. You lose lives by contact with enemies or traps, or falling off the level, though it’s not possible to fall of the edge of the screen. You gain an extra life every time you collect 100 coins. Unfortunately there’s no way to hit enemies or simply jump on their heads to take them out. It’s a shame, but then again that probably wouldn’t suit Toad, either. You can either try to avoid bad guys or get rid of them by throwing turnips at their heads or falling on top of them from a higher platform. In those cases where you have to enter dark areas, Toad has a flashlight that he can turn on and off as needed.

Each level also contains three Super Gems which you need to collect in order to unlock the next level, so it’s a good idea to collect as many of them as possible. There’s also a Bonus Challenge you can complete in every level – for example, find a Gold Mushroom, collect 100 coins, or get rid of all the enemies. However, you won’t know what the challenge for a given level is until you beat the level for the first time. The game takes about six to eight hours to play through, depending on how much stuff you collect or whether you feel like completing all the Bonus Challenges – a pretty good length for this kind of game.

A touch of Mario

The bright and colorful levels in Captain Toad: Treasure Tracker fit the usual Super Mario style. The levels are full of life and appear to be very well thought out. Animations for Toad and Toadette as well as for the monsters are smooth and fluid. And of course the characters are pretty damn cute, too, like the rest of the game. It’s a nice change of pace from all the ultra-realistic games that dominate the market today.

Like the graphics, the sound in this game fits right into the Super Mario series. When you collect coins, it sounds like it does in any other Mario game, as do other things, such as Toad himself, and of course the famous POW block. Each level has its own background music that sounds authentic and does a good job of capturing the right atmosphere for the individual level.

Captain Toad: Treasure Tracker is a really good game. The storyline is a bit too short and kind of weak, but the rest of the game is pretty impressive. There are lots of different levels, and they’re good whether you only play video games occasionally or whether you’re a real gamer. Some objects are really hard to find, so more often than not you have to play a level more than once to get everything. The same goes for the Bonus Challenges. I also really liked the cute, cartoony graphics – they remind me of my childhood, and I don’t think a game needs to have incredibly realistic graphics to look good. I can definitely recommend this game to any Super Mario fan, as well as to anyone else, of course. (Dominik Probst; translation by Chase Faucheux)

Without half-finding fault with game enough. With rather good graphics and an interesting plot. This game will help not only to pass away time, but also it is pleasant to spend it. Game - successful continuation of games of the Mario series. I advise to try. 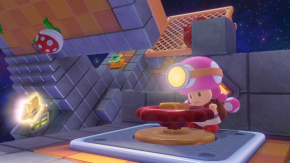