It’s safe to say that this comeback is one very few people were expecting to see. After his last standalone title in 2000, Strider Hiryu has skipped past entire generations of consoles to return with style. Does Capcom’s showcase ninja slash through his dystopian world as adroitly and entertainingly as we remember him doing? Read the review to find out.

The Strider reboot follows pretty much the same storyline as the 1989 series debut. In the massive urban surveillance society of Kazakh City, Hiryu belongs to an elite group of high-tech ninjas called Striders. Like the older games, the 2014 version doesn’t contain much in the way of epic storytelling. It’s all about the eternal battle between good and evil – in this case Strider Hiryu against a ruthless dictator and his loyal followers. Cut-scenes and dialogue sequences take a back seat for long stretches of the game’s six to eight hours of gameplay, but at no point does the strictly utilitarian storyline make the game any less fun to play.

Ninja in a China Closet

Similar to recently released 2D ninja platformers like Mark of the Ninja, which unlike Strider dealt more with the stealth variation on the ninja theme, the action in this game is focused on the pure gaming experience. In general, all the game elements fit together outstandingly well, but a few flaws are impossible to overlook, and they sometimes work to undermine the overall effect of this otherwise well-done game. In this respect, the relatively open world (in which the character can move not just left and right and up and down, but the other way around too) proves itself to be both a blessing and a curse. At any time, you can go back to areas in the game you’ve already visited. But no matter how thoroughly Hiryu exercises his ninja skills, he will usually find all the enemies back in their places when he reenters the area. And I don’t mean just the humanoid enemies he’s already dispatched, but also gun emplacements. Apparently the maintenance crews around here can repair these things at lightning speed before Hiryu shows up again. They must never need a break.

There’s also a whole ton of extras to discover, way beyond the helpful health and energy upgrades. Of course the player is often left asking himself whether it’s worth making the effort just to pick up one of the many pieces of concept art or snippets of storyline spread throughout the game. Perfectionists will disagree with me here, I’m sure, but there’s a Challenge Mode for them to try. A helpful map complete with an arrow pointing to the next goal is enough to dispel the persistent feeling that the player could get lost somewhere in the game. Also really well done are the alternating camera angles, offering various points of view – sometimes right in the middle of the action, sometimes far away from the character – though this does require some getting used to.

Aside from the weaknesses mentioned earlier, Strider turned out to be an awesome game. A sophisticated upgrade system provides motivation, offering a wide range of options, which the player will have to use in various ways. Different kinds of enemies are particularly vulnerable to certain attacks, and you can tell which ones by their color. Hiryu also has to use the skills and gadgets he’s acquired in order to make progress in the game environment – for example, he can only get through some doors by using ice or magnetism. Finally, there are many sub-boss battles throughout the game that are presented very well. The bosses’ constantly changing attack patterns require the player to proceed with foresight and tactical skills, as well as good reflexes.

The player has to have the interplay between the various skills and abilities under control by the time the he gets to these demanding encounters, otherwise it’s “game over” after just a few seconds. In any case Hiryu operates according to the motto “offense is the best defense”, as without any block function to speak of, his defensive abilities are about as effective as those of a certain Colorado football team was this past February. And so he climbs, slides, jumps, shoots, and slices his way through the enemy hordes with no regard his own safety, constantly using his various attack abilities or devastating upgrades for his sword, freezing and burning through even the toughest foes. Gameplay sequences requiring quick and nimble movement to get past obstacles, both moving and unmoving, are heavily reminiscent of classic adventure games like Prince of Persia, Castlevania, or Metroid. You can’t go wrong following those examples, but the game’s entertaining combat action is definitely the main draw.

On the technical side, there’s no question of a platformer like this being able to compete with the major productions on the newer consoles, but the visual environment in muted hues works really well, offering above all a coherent and fluid experience. All the models are beautifully animated as they move through industrial complexes, mazes of buildings, vast urban areas, snow-covered landscapes, or even up in the air high above the city. Adding a fine touch to the visually slick apocalyptic atmosphere are some impressive weather events, like rain and snowstorms. Even the explosions, weapons animations, and environmental effects fit well in the overall picture.

The music underscoring the game is more restrained than anything, and it could be more dynamic and compelling. The voice acting is intentionally overwrought, and comes off pretty dramatic. The background sounds fit the game’s action well, and that of course includes the weapon and combat noises in particular.

Well, there you have it – the first title to surprise me in a good way in 2014 is a very entertaining ninja hack’n’slash platformer with an intuitive gameplay style, awesome boss battles with a challenging, though never unfair, difficulty level. In the absence of alternatives, especially on the new consoles like the Playstation 4 and Xbox One, this inexpensive download game is worth more than just a fleeting glance. Don’t just leave it to the retro-gaming fans to give Strider the chance it deserves. (Christian Schmitz, translated by Chase Faucheux) 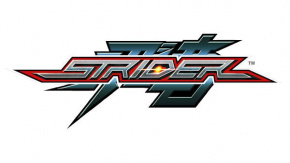