For PC players that love indie horror, “Lone Survivor" was one of the biggest surprises in the last year and a half. The PS3 and Playstation Vita Director’s Cut versions will be released shortly before Halloween, which will optimize the horror experience with cross- play features, new content and some gameplay adjustments for the current Sony game systems.

The apartment complex from hell

The world has caught the plague once again; an unknown virus has killed off and/or mutated the bulk of the human population, turning the world into a mess of horrific monsters bent on killing those who’ve survived. As an apartment dweller that’s not only survived but also managed to not catch the virus, you find yourself pitted against a hostile and dangerous world. You make your way through the dank apartments and corridors, piecing together news of your broken world, finding scattered survivors, and battling the mutated undead.  You’re not completely defenceless however; you can arm yourself with small firearms, or even lure the monsters away from you with rotten meat, slipping by them as they eat their grisly meal. Ammo is scarce (big surprise there), so the ability to outthink the monsters comes in handy.

Being aware of your environment is crucial to your survival, and this means examining everything you come across. Your environment is scattered with all sorts of useful objects, and you can save things in your inventory and use items to solve simple puzzles as you search for weapons and edible food. Hunger is almost as big of a threat to your health as the monsters you face, in addition to a surprise enemy; insomnia. That’s right, sleep is hard to come by when everything is trying to kill you, and a text display lets you know how much longer you can go without sleep. You must eat regularly and find safe areas to rest, with the beds and cots also serving as save points.

Mirrors are distributed generously throughout the world, and they act as teleportation pods of sorts between one area and another, which comes in handy later on when you have to traverse long stretches from one area to another. An overview map like the one found in "Silent Hill" is also useful for making your way through, and you can find a flashlight to illuminate the darkness, although you must keep it stocked with batteries.

Graphically, the horror is displayed with a rather raw 2D appearance, but it doesn’t detract from the action at all. The game successfully maintains a solid ambiance throughout, with jump scares punctuating the action through a variety of filters which is very effective as well. Even the play of light and shadow is successful. Rounding out the experience is a haunting soundtrack, and the controls are spot on, feeling exactly like you’d expect them too.

"Lone Survivor: The Director's Cut " on PS3 and the Playstation Vita fared considerably better than the so-called blockbusters of the horror genre in the last few years, which was quite a shock to both game makers and fans. The straightforward gameplay works exceptionally well with the setting, and little touches like the forced eating and sleeping add to the anxiety. Combined with the stylish look and creepy acoustics make this indie title a must buy, especially for the price. 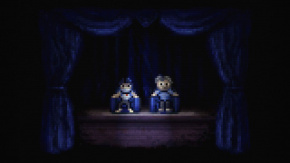