With "Black Guards" the adventure specialist Daedalic has published a game from the "cult Pen & Paper" – Universe, "The Dark Eye" for a second time. After "The Dark Eye: Chains Satinav" this time around Daedalic has placed the turn-based role-playing game in the foreground. With over 180 different cards, players will have their hands full fighting through hordes of varied enemies, and exploring the game’s creative universe.

The story in "Black Guards" is best experienced rather than told, so I will go light on the spoilers. It begins very simply, with the hero being wrongly accused of killing princess Elanor, and being forced to prove his innocence by finding the true culprit, requiring him to journey through Aventuria. To say much more would be to spoil the many surprises and twists that wait in store for players, but rest assured there are many twists and turns to be found.

Like any good role-playing game, "Black Guards" starts with character creation. True fans of the genre will be disappointed here because it is merely a character choice and not a true creation as per the official DSA regulations. Three classic classes are available:  warrior, mage and hunter, and the basic values ​​of each character are pre-set and cannot be changed. Some may find this refreshing (especially those new to the genre), as they don't have to make hard choices with the character creation or study the rules, and the game begins almost immediately.

At the beginning of the game, the player receives the support of a dwarf warrior and a mage, who are also imprisoned in the dungeon, albeit for different reasons. After a brief round of introductions, the newly formed group begins their fight to freedom. A well-structured and thorough tutorial explains the user interface, and then it’s off to tackle the first waves of enemies. The actual fighting takes place on a map divided into hexagons, and the view can be moved with a scroll of the page to a top down view. DSA connoisseurs will find their way around quickly, as spells and weapon’s values ​​are taken straight from the official rules. After each successful battle, group members receive quest points as a reward, which can be directly invested in new skills or to improve life points, astral energy, or one of the different branches of service. In contrast to the classic pen & paper game, improving the attributes of Black Guards can be done ​​at any time with the character window. At least this was the case in the Early Access Beta.

Using a world map, the group now travels from village to village, fulfilling numerous side quests to find villagers. It’s smart to speak with all non-playable characters, as this offers the best way to discover the most rewarding and diverse quests. As you increase your progress, the enemy groups become bigger and stronger, and players can use the battle-field to their advantage. Crates can be overturned in order to provide cover, wasp nests can be shot down from a distance, or rising methane gas in the swamps can be made to explode.

The playing time of the first chapter is three to four hours, assuming you take your time and take on the available side quests. Daedalic has announced a total of five chapters for the full version.

"Black Guards" is programmed on the Unity 3D engine and provides solid, though not outstanding graphics.

Even if it is a German developer and publisher at Daedalic, the German version of "Black Guards" is not preferable to the English version. Especially with side characters, the selection of German speakers is often inconsistent.

The first turn-based role-playing game from Daedalic is overall quite successful. The combat system is well done, advanced character development is exciting, and there are many varied strategic scenarios to play through. In short, the "Early Access" version of "Black Guards" will definitely make you want more. 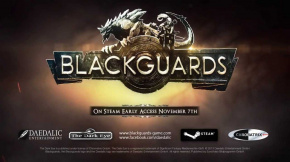