Adventure fans can say a sad but fond farewell- "Goodbye Deponia" closes the door on the comical garbage planet that has provided a ton of laughter for avid players of the genre. Developer Daedalic lands a historic hat-trick in the waning twilight of 2013 by releasing "The Night of the Rabbit"  and "The Dark Eye: Memoria" in record time.

After the playable introduction, "Goodbye Deponia" picks up where "Deponia" and "Chaos on Deponia " left off in fine form once again: Fanboy Barry uses the situation to his advantage by giving an entertaining interview, and after a few crazy feats, game character and anti-hero Rufus, along with his female companion, take aim at the ultimate goal, preventing the destruction of Deponia and ultimately reaching the cloud kingdom Elysium. The biggest adversary in this endeavor is once again the Organon, who wants to prevent this at all costs. In addition to already well-known characters, newcomers Cowboy Dodo and Bozo join in this time around to round out the family.

Boasting up to 15 hours of total play time, the events of the game focus mainly on Rufus once again. Through a sequence of unfortunate circumstances, he is suddenly thrust into encounters with similar-looking enemies Argus and Cletus, as he races towards the grand finale. Rufus is again quite the character; he doesn’t mince words, he’s selfish, narcissistic, hopelessly arrogant, can’t concentrate, won’t admit when he’s wrong, and generally creates hair-raising problems that devolve into chaos with devastating effects. On paper this can all sound like a bit much, but what it ends up being is nothing short of refreshing entertainment similar to Guybrush Threepwood from "Monkey Island" or the animal Duo "Sam & Max" of the Freelance Police.

"Goodbye Deponia" overflows with bawdy humor, and doesn’t shy away from the more sensitive issues. But it is precisely these sensitive issues where the developers show a dexterous hand for the daring, just like they did previously in "Harvey’s new eyes". Countless clues can be found in imaginative scenes that make fun out of Super Mario, Donkey Kong, Mission Impossible and many others. The story is never boring, mainly due to the almost endless amount of allusions and quotations, as well as numerous dynamic cutscenes. For the transitions between chapters are hilarious vocal performances by Jan Müller-Michaelis.

Once you realize that everything in Deponia is a little looney, the mysteries found here are definitely challenging but totally solvable with a little thought and imagination. Even the seemingly hopeless search for the so-called “unpronounceable object” (play the game to see what I mean) intended primarily as occupational therapy for Rufus, proves to be very entertaining and ultimately ends up making quite a bit of sense in the garbage planet world. The brain teasers run in a relatively linear and typical way for the genre; dialogues are conducted, objects are collected and combined either in your inventory or in the locations, then used to solve the riddles.

The challenges get trickier during the outstandingly ambitious final period on a high level, which calls for particularly creative thinking, reminiscent in structure to the classic "Day of the Tentacle". Rufus clones himself, so three versions of him are in the trash. They are all in different locations however, so the first step is to find a node in order to allow the three figures to exchange objects with each other. Once that's done, these actions can be executed at any time by using a symbol. The hotspot display can be used to show the points of interaction at any time, and in addition, there are many optional mini tasks in the final game, which can be skipped. For example, Rufus must deflect cameras in a secure area in a certain direction in order to navigate his friend Goal through the location. This NSA scenario will remind players of a shrill disco dance floor, and provide some laughs for sure.

At first glance, the graphics haven't seemed to change a whole lot. The detailed, colorful cartoon look of the garbage planet has a wonderful shine to it without resorting to annoying scene-recycling. The animation is noticeably touched up so that movements are visibly smoother. Actions like combining objects are executed in a witty and exaggerated way, that just add to the enjoyment.

The acoustics of "Goodbye Deponia" have raised the bar for future titles, period. Everything is just right; the music and scenery sounds are dead on, regardless of the situation. Even seemingly unimportant minor roles are of the highest caliber, including rapper Smudo of "The Fantastic Four" who lends his voice to the new character Cowboy Dodo, and he sings two hilarious must-hear songs. In addition, Joscha Fischer-Antze, the German voice actor of Scrooge McDuck is a real stand out. Character Rufus and his adversaries Argus and Cletus benefit greatly from Monty Arnold's fantastic voice, firing off a great repertoire of mood swings and lines of dialogue.

"Goodbye Deponia" concludes a great point-and-click adventure trilogy, while setting new standards in terms of character design, presentation, humor and mystery. The only serious drawback is that the series is at an end. Fans of the genre should not miss this masterpiece. 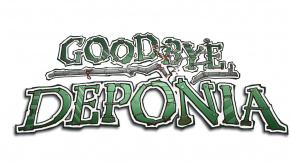