The fact that cockroaches will probably outlive humans isn’t exactly news. These creepy crawlers can survive nine days without a head, and make it through a stint in a microwave. Daedalics shows us what the apocalypse looks like from the perspective of a roach in their newest adventure game.

Jim and his pal Bud got into trouble due to some fragments of human military technology, and are now locked in a military bunker. However, the two young cockroaches are not as lonesome as one might expect. Spiders, moths, flies, puffer fish (!) and even a rather battered looking bird flies around freely inside the artificial habitat, and all have their own little problems. Amazingly, the electricity still works, and Bud and Jim can utilize sewing and washing machines to help them with their various tasks. If the two can stop making clumsy mistakes, they may just make it out of the bunker and back to the surface world.

The big difference between other Daedalic titles like "Edna breaks out" or the "Deponia" series is that the bunker world is built in three dimensions. In cockroach-style, the walls and ceilings must be climbed and navigated. The game view rotates with your movement, and the game is controlled by a mouse and keyboard. However, this rather unusual approach works well with the classic-esque adventure game. The puzzles are fun, but hard to master. For example, putting the detergent into the appropriate machine is self-explanatory, but how do you take advantage of the bubbles the machine generates?

The inventory system works well, and the cartoon-like world has a lot of charm. Inventory items can be combined and used, and with enough pointing and clicking, you’ll find a way to solve even the toughest puzzles. The two protagonists are lovingly animated and their baby talk can get a little irritating, but it’s mostly pleasant. Notes and tips are delivered via thought bubbles, while the cutscenes mix up the gameplay a bit.

"Journey of a Roach" is the first work of the young Swiss Studios Goblin Games, founded by five game design students and published by the Adventure specialists, Deadalic games. The game reinvents the 3D Adeventure not from scratch, but by offering interesting new ideas. The difficulty level is balanced well, there is a lot to explore and discover, and the characters are likeable.

Those who found "Bad Mojo" too hard should give "Journey of a Roach" a chance. The tested version makes a stable and functional impression, and the game will be released for retail and on steam soon. 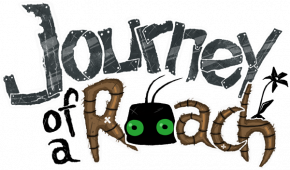