Someone must have forgotten to mention to Scrooge McDuck that there is a market crisis going on, because as I load up the “new” "Duck Tales Remastered" I find him still swimming in a vat of golden coins. It’s been 23 years, but Scrooge is still as rich and crotchety as ever, ready to smash his enemies with his trusty cane and save the day... or at least his money.

For those who don’t remember (or are too young to have been around), way back in 1990 there were NES and Game Boy game versions of the popular animated series "Duck Tales", which ran for an impressive 100 episodes. The game is back, and remastered, with boosted graphics, but the same old fashioned gameplay. “Duck Tales Remastered” captures that special Disney charm in a wonderful way, with an updated throw-back graphical style. The developers have used the original 8-bit-structure; characters and locations start from hand-drawn graphics which have been created with great attention to detail and look surprisingly similar to their colorful cartoon counterparts from the television series. Fans can look forward to reuniting with their favorite characters from the show: Scrooge McDuck’s grand-nephews Huey, Dewey, and Louie, lovable nanny Mrs. Beakley and her granddaughter Webby, proper butler John, fearless pilot Launchpad McQuack, inventor Gyro Gearloose, cave duck Bubba and many others have all found their way into the game. The bad guys are here in force as well, with fan-favorites like the witch Magica de Spell, the Beagle Boys and Scrooge's main opponent Mac Moneysac all making appearances.

The main plot of the adventure is straight forward and could have been ripped right from an episode of the show: somebody has broken into Scrooge's money bin, and now the richest duck in the world must begin a globe spanning treasure hunt, from tropical rain forests to the gloomy castles of Transylvania, old mines to snowy mountains, and finally leaving earth altogether for the airless infinite of space.

The supremely memorable English theme song has been redone into several variants, which is a fun bonus. There’s a retro composition, a piano version and the original version of the theme, which all invite players to sing and hum along. The rest of the soundtrack is solid, if less memorable.

Depending on the challenge level, it will take about three to four hours to play through the game. Oddly, when you buy the PC version, you get an installation disk and an activation code for the Steam client that allows you to download the remaining content of "Duck Tales Remastered". Weird, but ok.

The player takes control of old Scrooge’s plumage in seven short, classic 2D levels, with McDuck's cane serving as a pogo stick to bounce through the sections. The cane comes in handy when McDuck needs to smack rocks towards treasure chests or enemies, or bouncing on opponent’s heads. Enemies are mostly comprised of rabbits, snakes and other aggressive animals, and can be taken down by the jumping attack. Another option is to jump over the enemies, which tends to be easier since their patterns are usually fairly simple. More advanced players looking for a bigger challenge should select one of the two higher difficulty settings right off the bat, while beginners will prefer the breezy difficulty of the easiest setting.

Despite the simple game mechanics, some features do stand out, but unfortunately, not all in a positive way. The score is only saved after completing a level (annoying), and all enemies and items that Scrooge has just kicked from the screen appear in the same spot if you backtrack, as if nothing ever happened.

A map can be accessed via the pause menu at any time, and the accessible money bin continuously fills up with the treasures that are collected during the game. All in all, the adventure lacks highlights, and even when they mix things up, it’s only for a moment. The times that you act as a shadow figure can be counted on one hand, and the zero gravity while you drive a spaceship can only mix up the gameplay for a short amount of time. Even the boss fights are so simple that they come across like a relic of bygone days, which – honestly – they are. In the last few minutes the otherwise slow pace of the game picks up quite a bit due to short time limits, which is a nice change. Online leaderboards and a good amount of unlockable extras round off the single-player package, but multiplayer options were not integrated.

The graphics of "Duck Tales Remastered" are simple but pleasant. The locations fit the theme and the characters seem like they were pulled right out of the TV series. They are voiced by the well-known actors of the original English cast, which is another plus, and the German subtitles name the characters by their correct English names, keeping the experience feeling genuine.

Thanks to the exaggerated representation of the gestures and facial expressions, the characters have enormous recognition value, even though beak and mouth movements are completely missing. All movies can be skipped by pressing a button which is nice, and the controls function as they should, although most players will prefer the gamepad over anything else. (C. Schmitz; transl. by D. Liapis)

"DuckTales Remastered" is a nice reissue of the original game that was released back in 1990, and is a bit of a love letter to retro fans of the old show and game. Despite the small release of the retail version and the extremely short playing time, a lot of fan service is offered. If you loved Duck Tales, take this title for a spin, but people who are not into the Disney series should probably waddle around this title and take a look at more modern genre representatives such as "Rayman Legends" or "Giana Sisters: Twisted Dreams" 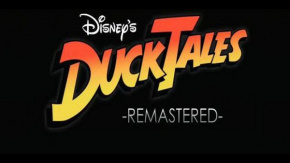