Start Your Legend Today! Brigandine: The Legend of Runersia Launches Today on Steam with Brand-new Features

TOKYO – May 12, 2022 – An army of knights and monsters await your command…! Publisher Happinet and developer Matrix Software are excited to announce that the turn-based strategy role-playing game (SRPG) Brigandine: The Legend of Runersia launches today on PC (via Steam). To celebrate this tremendous milestone, Happinet invites new players to the continent of Runersia to start their own legend in Brigandine: The Legend of Runersia with a 15% launch week discount on Steam.

Set in the continent of Runersia with six major powers at war, Brigandine: The Legend of Runersia finds players tasked with building an army of over 100 knights and 50 monster types to lead their nation towards a continental conquest in this simple, yet deep war simulation title. Developed by an all-star cast of Japanese game developers, including scenario writer Kenji Terada (Final Fantasy), art director and character designer Raita Kazama (Xenoblade Chronicles), and composer Sato Tenpei (Disgaea), Brigandine: The Legend of Runersia delivers a classic and authentic SRPG experience delivering hundreds of hours of enjoyment wrapped within a deep turn-based battle system, world conquest systems, and stunning new campaign.

The latest PC version also comes packed with new and exclusive features adding even more hours of content to the core game. Customize and select preferred power balance and starting knights to play through the campaign at leisure with no time limit once clearing the Main Mode once in the new Creative Mode. Start a new campaign with a head start and all items with the new New Game+ feature – and enjoy a more detailed Battle Map HP Display to help make more strategic decisions.

In Runersia, a continent created by the Rune God, mana rains down endlessly. Eons ago, five Mana Stones were brought forth by this continent and passes through history alongside human nations, eventually embedding into special Brigandine equipment to create Rune Knights – special individuals who can wield the mana power and stones embedded into their armor to cast skills and magic as well as summon and control ancient monsters. Six Brigandine nations of Runersia, each with conflicting ideals, beliefs, histories, and faiths, are divided by Brigandines of Justice, Glory, Freedom, Sanctity, and Ego, while the sixth nation exists without Brigandine.

The goal is to win battles to expand their nation’s influence until the entire continent of Runersia has been taken over by the player. 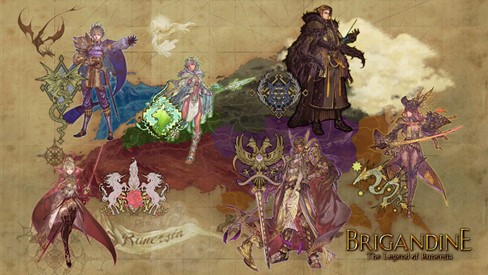 “Brigandine: The Legend of Runersia” Continents and Monarchs World Map

Happinet is a Japanese comprehensive entertainment trading company that boasts either top or near-top market share in each of its four main businesses: toys; visual and music; video games; and amusements. For more information, visit https://www.happinet.co.jp/english/index.html.