Madrid, November 18th, 2021. Yesterday, Sony Interactive Entertainment España (SIE España) hosted a new edition of the PlayStation®Talents' The Moment 2021, an online event that showcased trailers and gameplays of the Spanish games currently in development with the support PlayStation®Talents. This event also highlighted exclusive-PS4 and PS5 recently released titles, new updates on games already announced, and some other new titles premiered during the event. The 13 finalists of the 8th edition of PlayStation®Awards were also announced in the show; the winner will be revealed at a ceremony to be held in December that will have Shuhei Yoshida, Head of Indies Initiative of SIE, as part of the jury.

Here are all the trailers and gameplay videos of all the games we could see during the event: 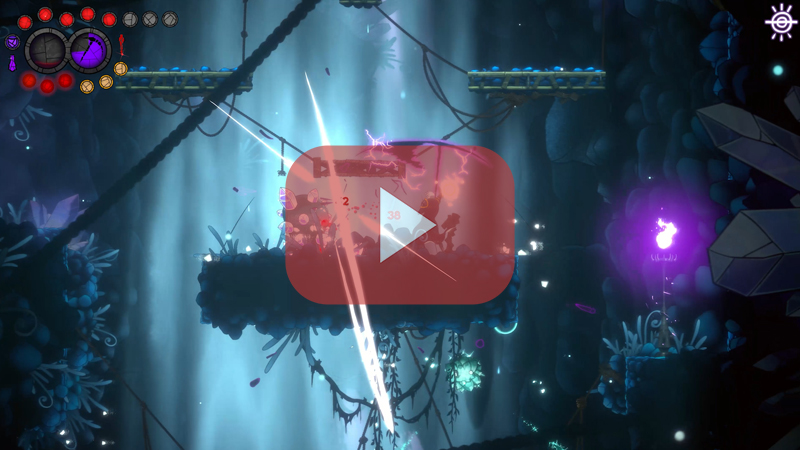 Aeterna Noctis feels like a traditional 2D Metroidvania mixed with modern gameplay mechanics and environmental storytelling. Taking the role of the King of Darkness you must regain your power exploring the vast lands of the world of 'Aeterna' across 16 different and connected areas in classic Metroidvania vibe. The fast-paced combat with truly challenging mechanics will join an exciting and deep story in this adventure made using traditional 2D animation. Coming on December 15, 2021. 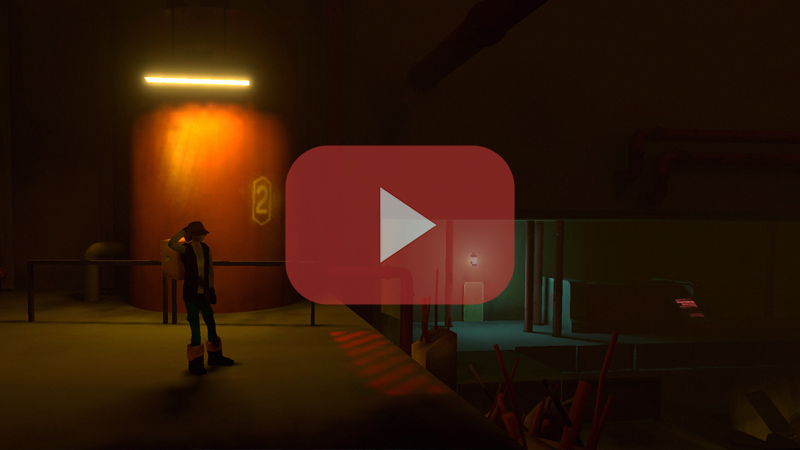 Antro is an adventure that blends puzzles and platforms with music and urban popular culture. The game will take us to an underground city, a seedy place where all cultural expression is persecuted by La Cúpula, an evil corporation that subdues the population against their will. The protagonist, Niitch, will unravel the secrets of this world and lead a revolution to the rhythm of the best music from urban culture. Release date to be confirmed. 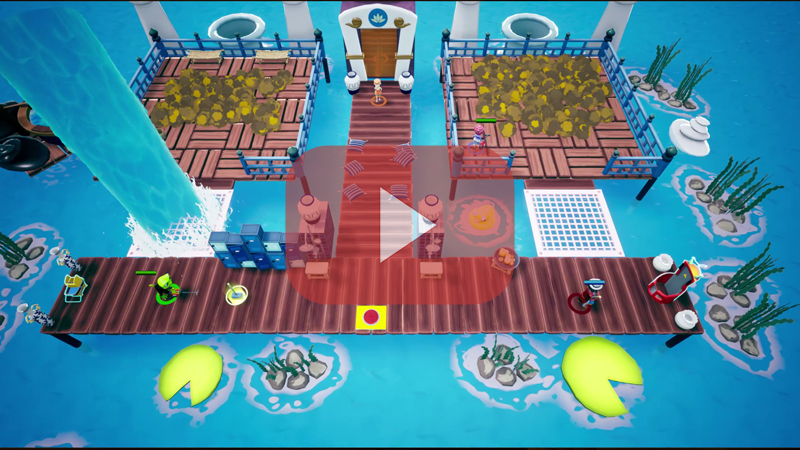 Welcome to Empyreum is a local cooperative party game for up to 4 players, in which you will need to clean different floors at a crazy hotel, with mechanics that involve daily tasks such as vacuuming or making beds... and other unlikely tasks, such as chasing ghosts or taking care of alien babies. Release date TBC. Let's mop up! 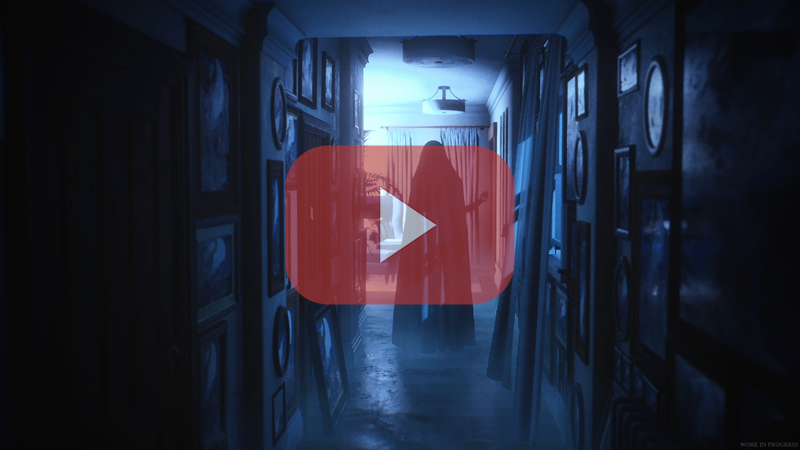 Luto (Broken Bird Games)
Luto is a first-person psychological-horror narrative experience where you will embody a person unable to leave their own house. Finding the way out will lead you through a series of experiences that will challenge your perception of reality. Explore the pain caused by the loss of a loved one, the horror of the insecurity to the deepest darkness hidden behind anxiety and depression... Coming soon! 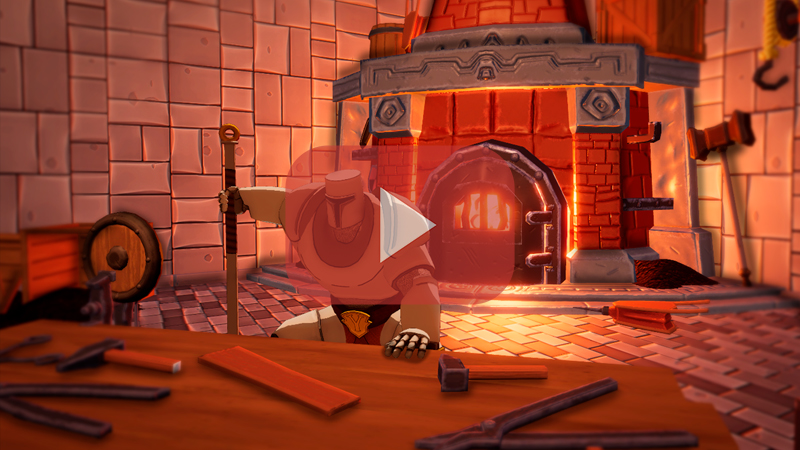 Rivalia: Dungeon Raiders (Fsix Games)
Rivalia is a blend of an action-RPG and roguelite with a cartoonish art style. The game takes place in the castle of Rivalia, where reality has been distorted due to a powerful spell. Our heroes' mission will involve regaining control of the castle and ending the curse to restore peace back to the kingdom. Release date TBC. 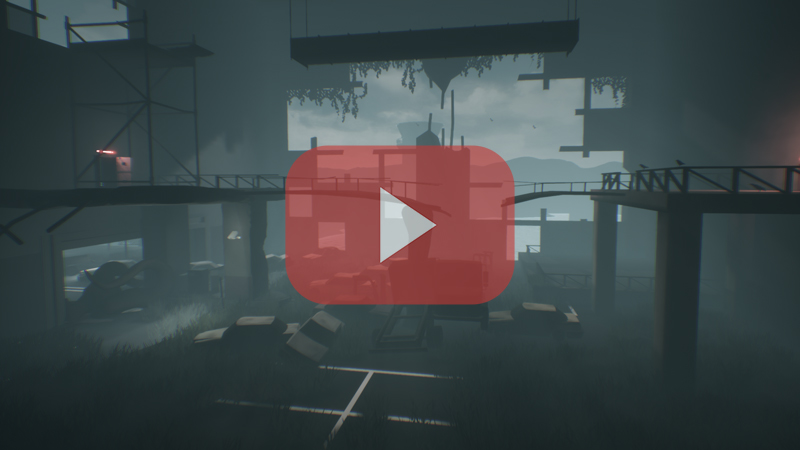 One Last Breath (Moonatic Studios)
One Last Breath is an adventure, puzzle-platformer game set in a lifeless post-apocalyptic world. Invaded by strange creatures that yearn to devour and absorb all remaining life and the few living beings that struggle for survival. Taking on the role of Gaia, a creature able to manipulate life and nature, you will embark on a journey that will take you through this devastated world in search for answers. Release date TBC. 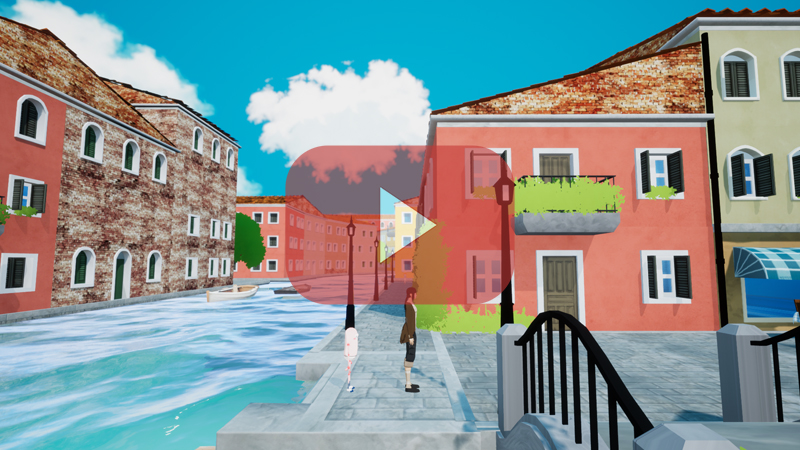 Aurora's Journey and the Pitiful Lackey (Not so Great Team)
Aurora's Journey and the Pitiful Lackey is an adventure side-scrolling shooter-platformer with various minigames in which players will take on the shoes of Aurora Aylesworth, a young astronomer who lives in 1927 with the Footman, a member of a mechanical race of alien creatures called Robotos, who arrived on earth 19 years earlier. One day, Aurora mysteriously receives new information about her father, who disappeared four years earlier while investigating Eureka, the spaceship of these peculiar creatures. TBR in 2022! 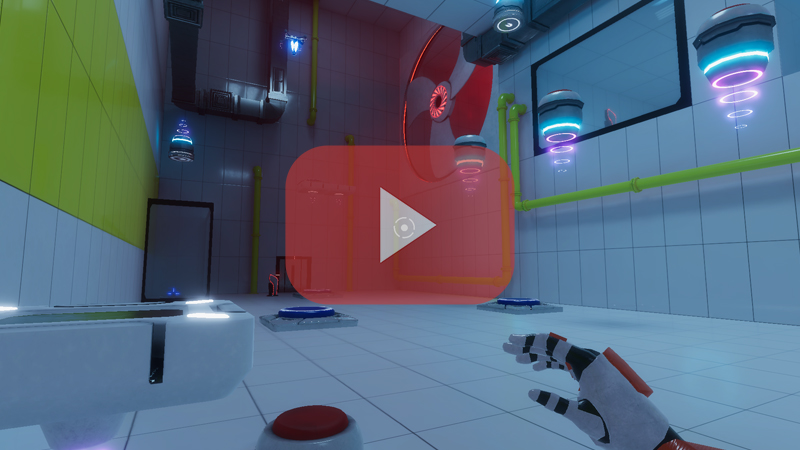 System of Souls (Chaotic Lab)
Year 2155. Life on Earth has become unsustainable, and the only way for humans to survive is to transfer their souls to a robotic body. In this dystopic first-person puzzle-platformer, you will step in the shoes of L-064N, a soul inhabiting one of these robots, seeking the truth of its identity and past. Release date TBC. 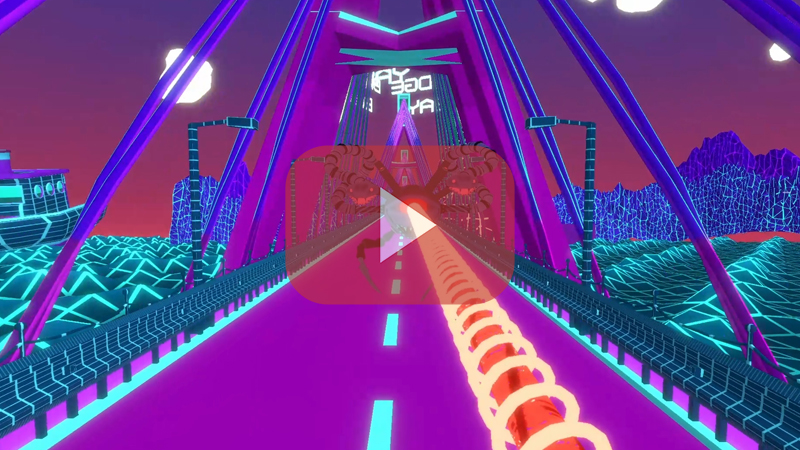 Neon Hat (Entalto Studios)
Run, jump and fly over Nueva Berria's cyberspace making your way in a world controlled by huge corporations! In this VR racing game set in a neon world (and featuring an original synthwave soundtrack) you will play as a H.A.T. operator, competing in the fastest and most prestigious Net Races to climb through global leaderboards and obtain the best score while also shooting down the most dangerous enemies in synth-wave skies. Now available! 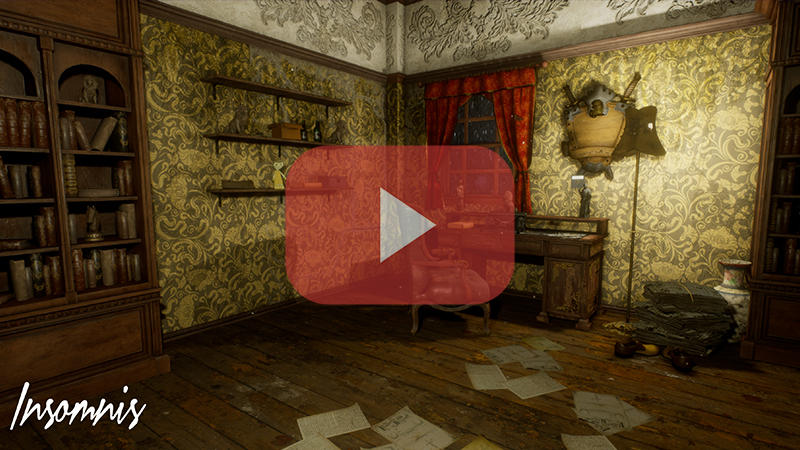 Insomnis (Path Games)
Path Games is the studio behind this first-person horror game focused on narrative, exploration and puzzles. Players take control of Joe Castevet, who will have to deal with a mysterious inheritance he has just received, and will lead him to discover the terrifying secrets of the Castevet mansion. Now available! 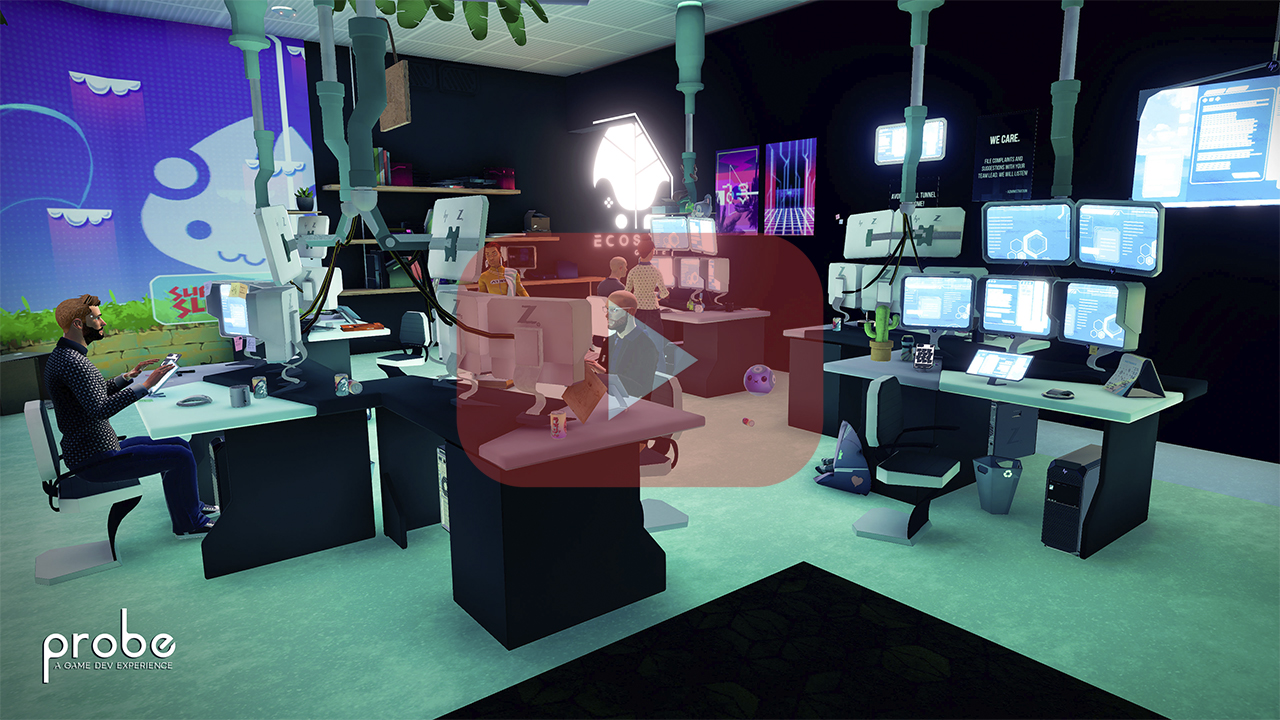 Probe is a practical and easy way to learn how games are made. Join a video games company named Ecosoft and start developing a new project through a first-person guided experience perfect for beginners. Train with the software and unlock new formative content as you reach the goals provided. Unleash your creativity as you take your first steps into the games industry. Available now!

A SHORT UPDATE ON SOME RECENTLY ANNOUNCED GAMES 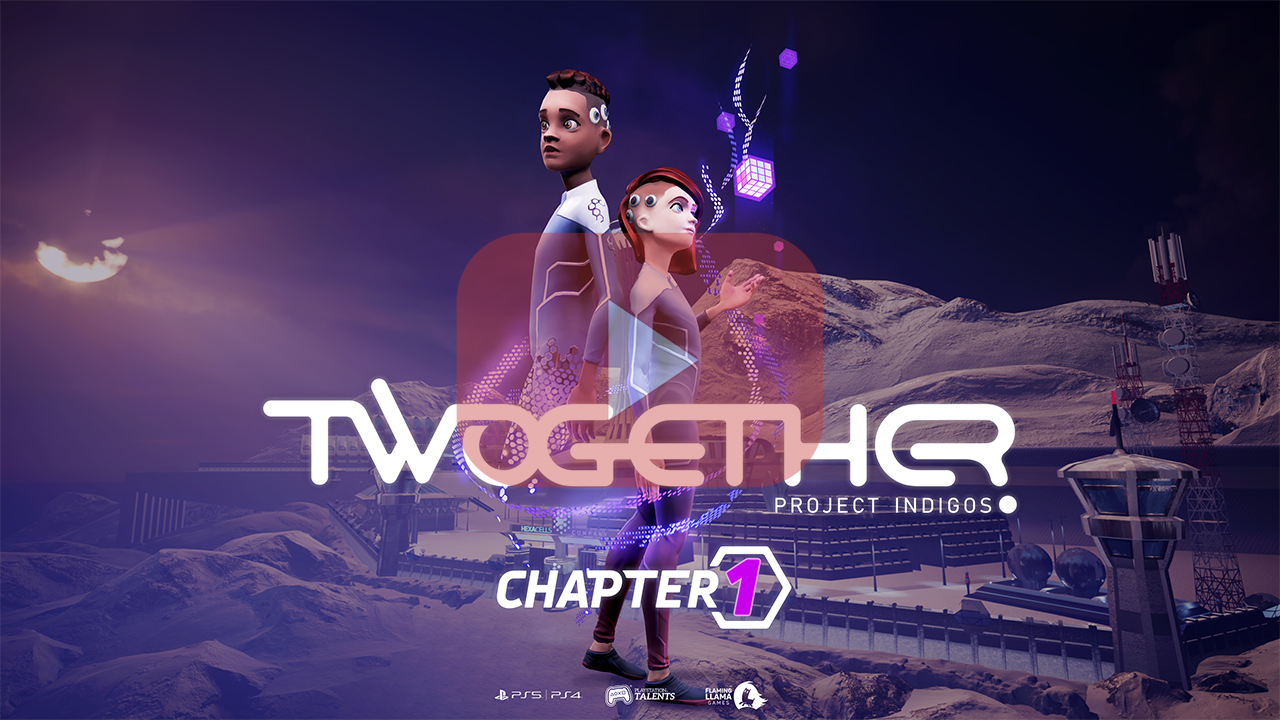 Twogether: Project Indigos (Flaming Llama Games)
Twogether: Project Indigos is set in the frightening Hexacells facilities, it will pose original puzzles that will only be solvable by collaboration. The game will make the players examine, evaluate and act according to the elements in their surroundings and the powers of the two protagonists, as if they were to escape from a gloomy Escape Room. The first chapter is coming on November the 23rd! 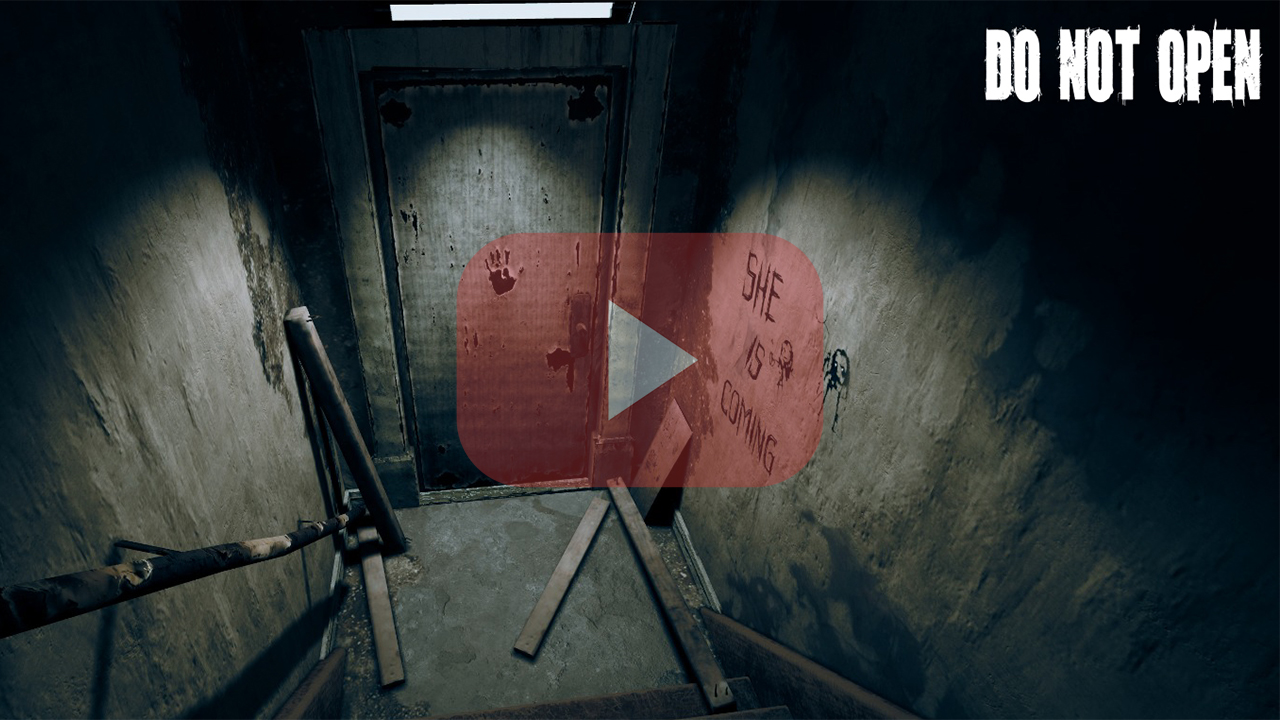 Do Not Open (Nox Noctis)
You appear inside a mysterious ever-changing mansion where most of the doors are closed and no one seems to live... excepting from the childlike presence that's threatening your life. What's the meaning of this madness? The only way to discover it and escape alive is by solving the puzzles located all over the building. Do it in the quickest way possible and find the truth before it catches you, or live in this nightmare forever... Release date TBC. 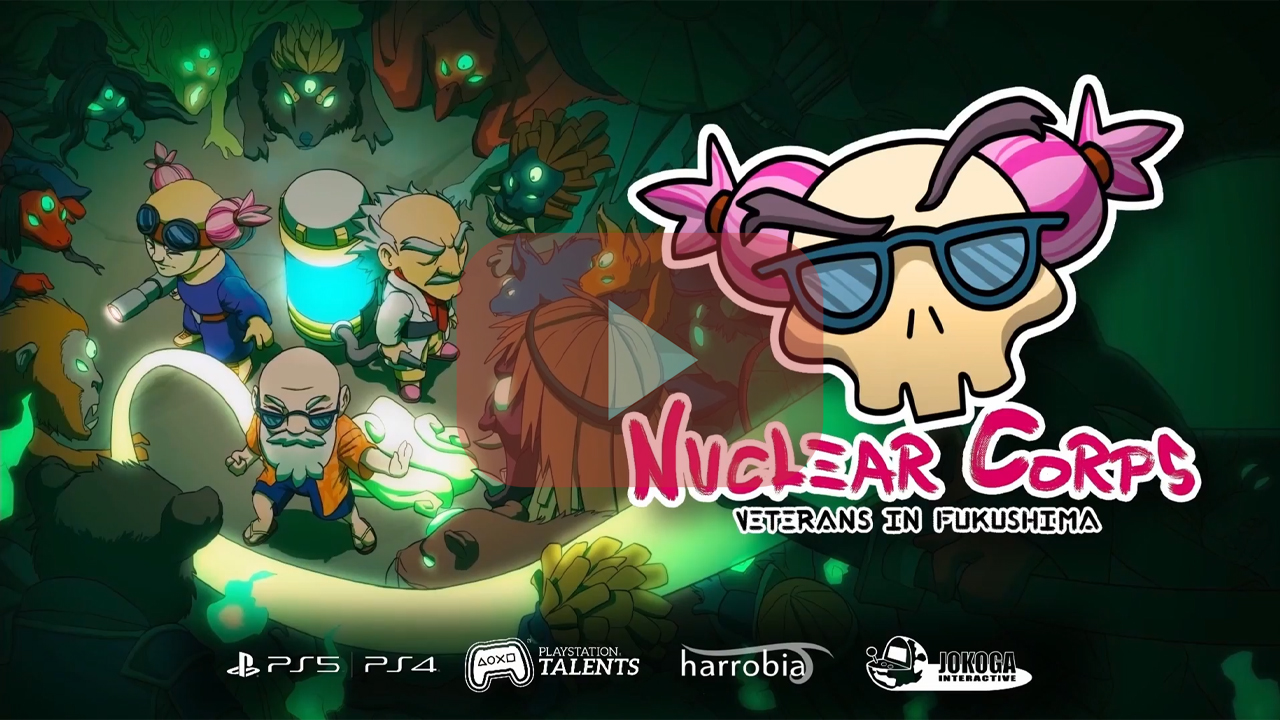 Nuclear Corps (Jokoga Interactive)
What can a bunch of radioactive monsters do against the raddest elders on Earth? Gather two friends and discover it as you face them as a trio of veterans with different backgrounds and skills. Get ready to kick some asses in the best company! Release date TBC. 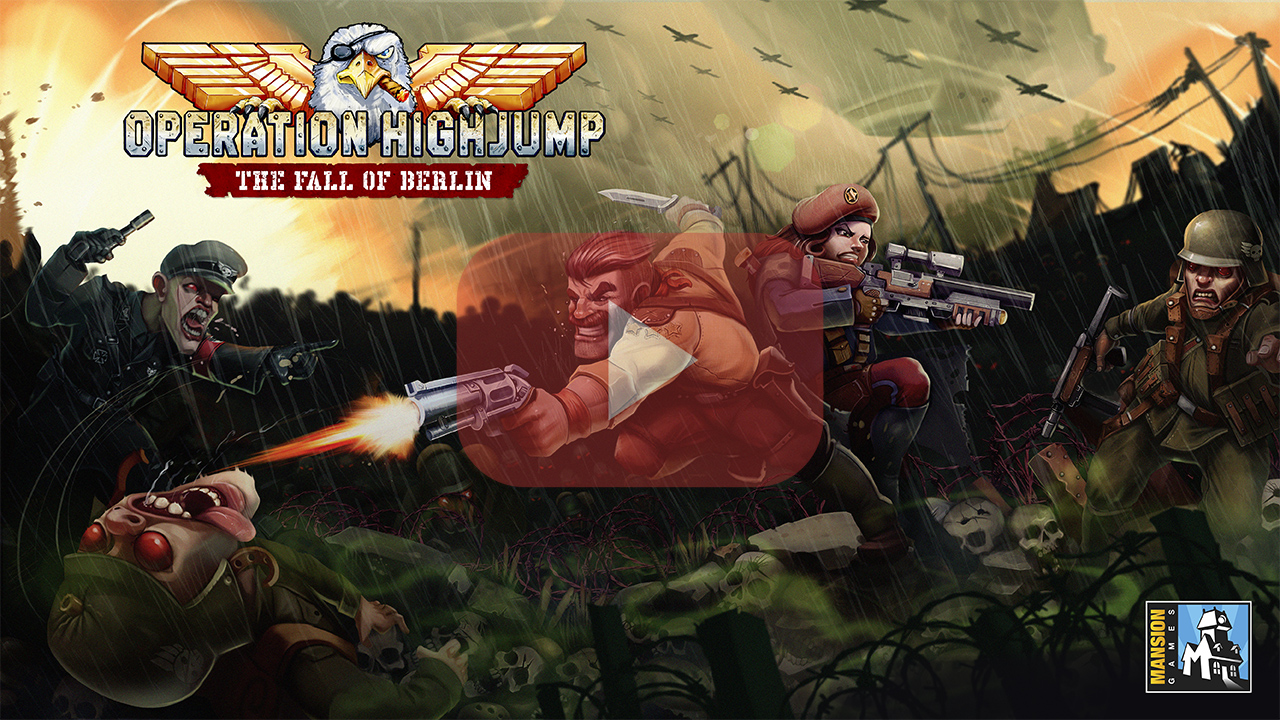 Operation Highjump (Mansion Games)
April 1945. As Berlin is about to fall into the hands of the Allies, the OSS is sending their best soldier to prevent the remaining enemies to escape forever. That's how Józef Kowalski and his special command, the Dogs of War, reach the capital city. The destiny of the world lays their hands, let the hunt begin! Release date TBC. 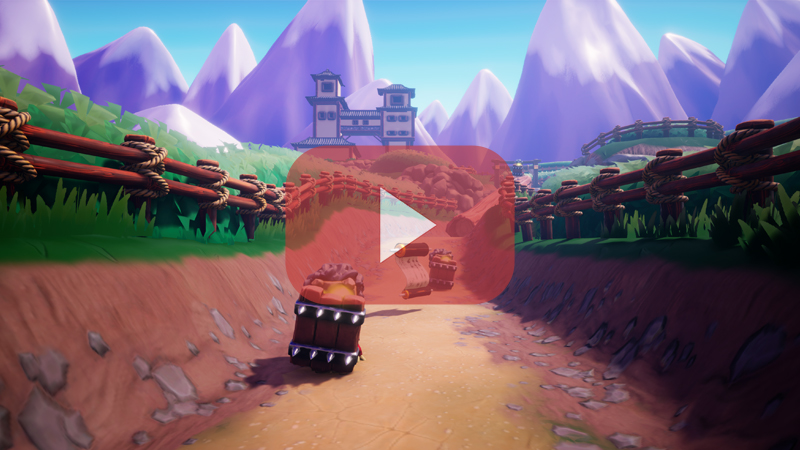 Wukong (A Tale of Games)

Wukong is a 3D action-platformer inspired by the mythical Chinese tales of the Monkey King, in which the legendary character defeats all his enemies with his magic staff. Release date TBC. 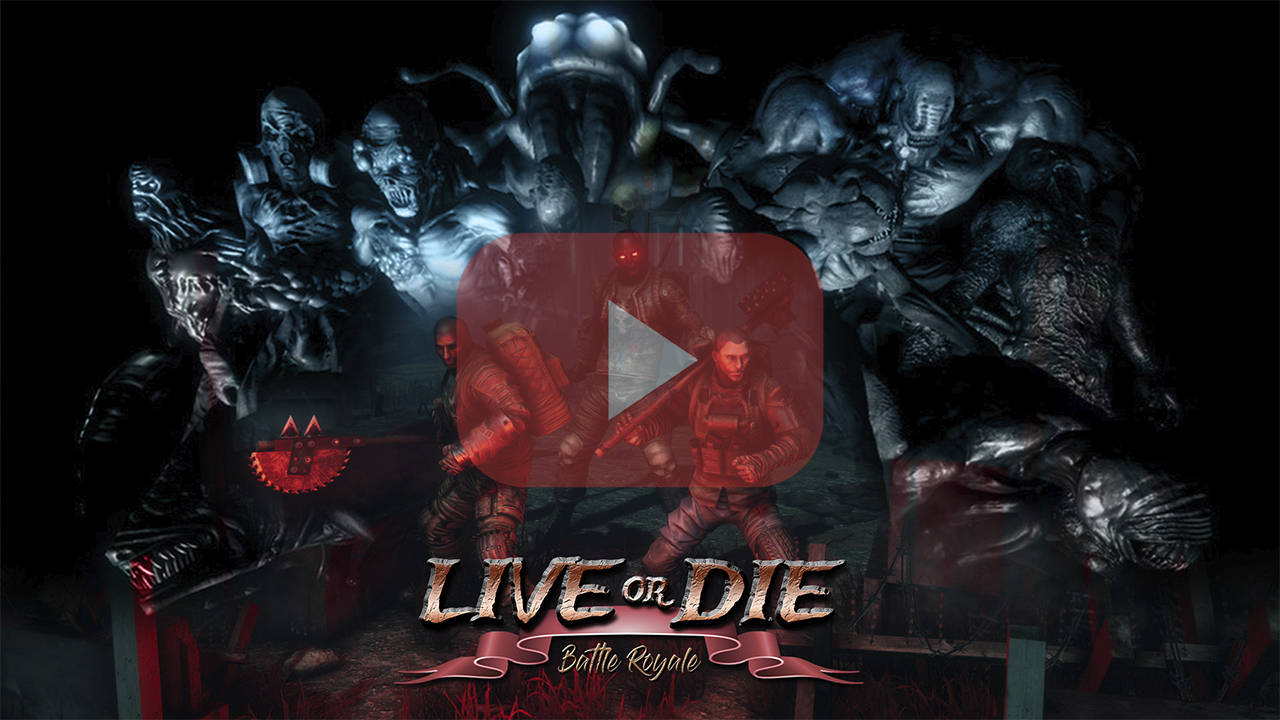 Live or Die (LoftGames)
There's no safe place in a dangerous post-apocalyptic city infested by monsters and hostile humans! In this game, you must win your right to survive by becoming stronger... and the only one alive. Perhaps, even at the expense of your own humanity. The free-to-play battle royale Live or Die will definitely keep you playing for hours! Release date TBC.

LASTLY, HERE YOU HAVE A FEW MORE SURPRISES! 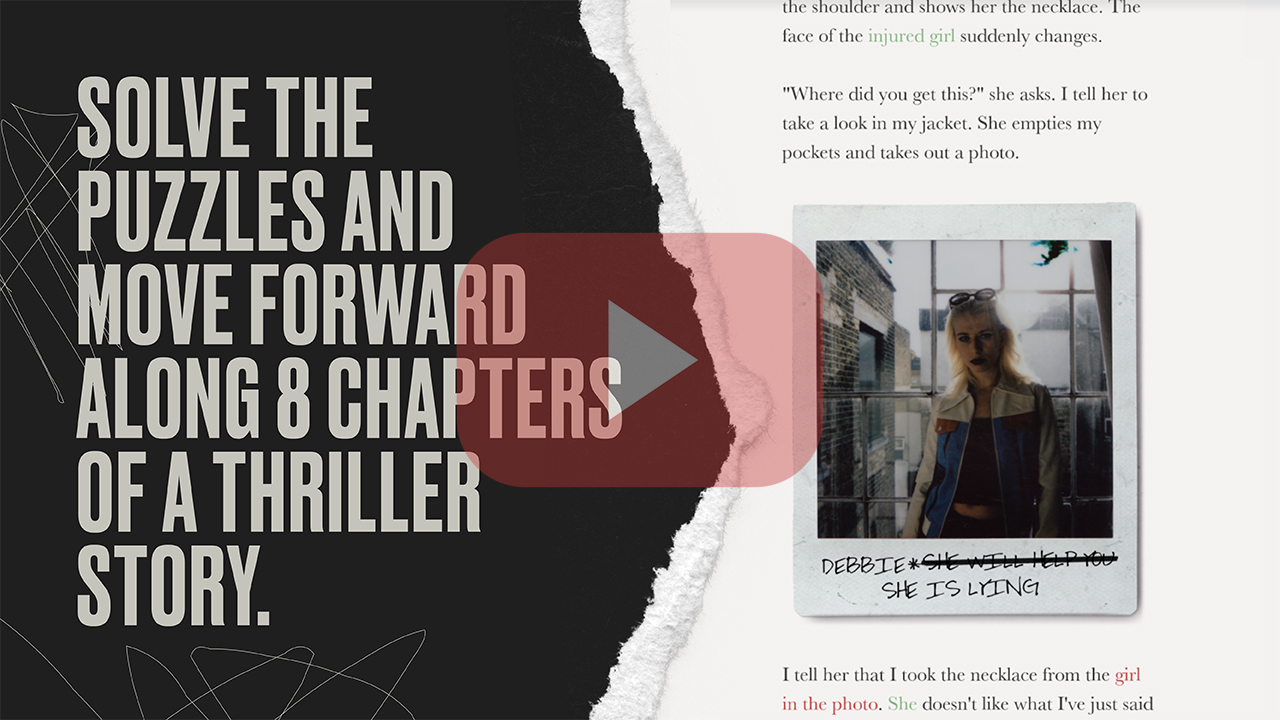 Unmemory (Patrones y Escondites)
A dead woman that lies in the bathtub of your motel room, but there's no way you can remember how she ended up like that... nor who you really are. The solution to these great enigmas is hidden in your blurry memories. What kind of uncomfortable truths will you find inside your broken mind? Discover it in this groundbreaking text-based puzzle game inspired by the choose-your-own-adventure books. Read it, play it. Live the mystery! Release date TBC. 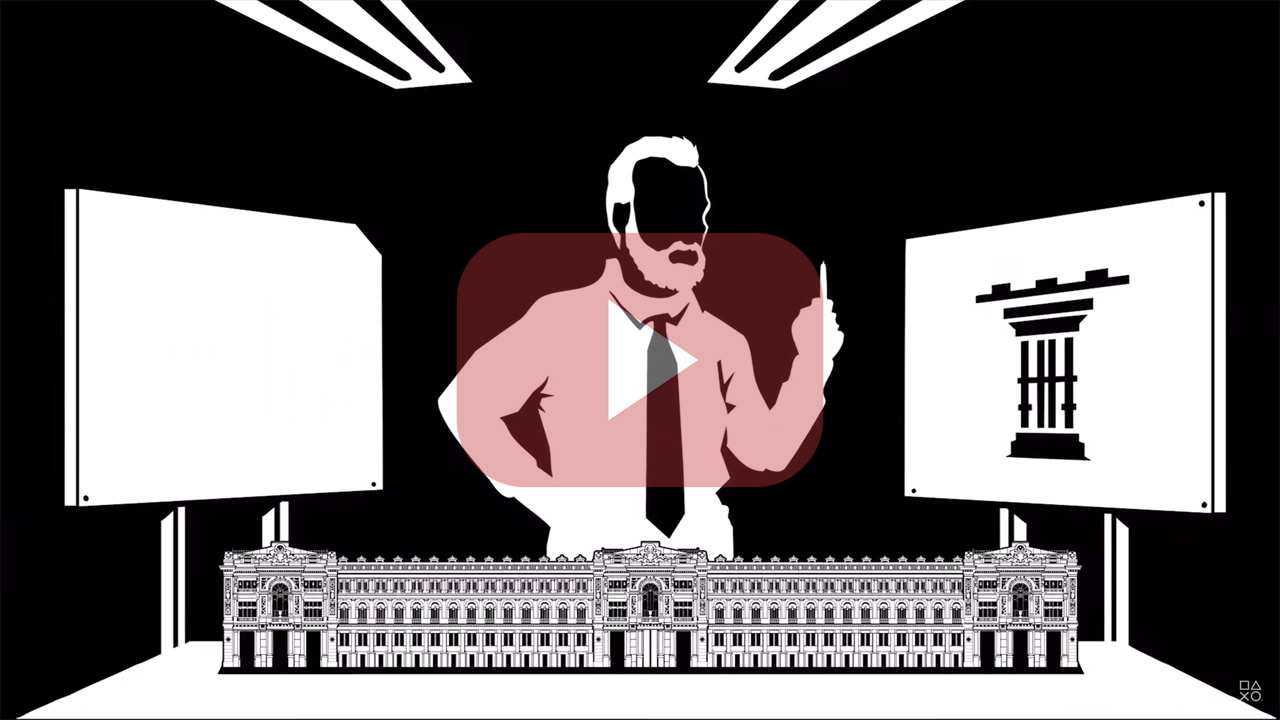 Way Down (Gammera Nest)
Mediaset Spain starts a new journey in the games industry with Way Down, a stealth and puzzle adventure where players are involved in an epic heist inside the Bank of Spain. Available on December 2, 2021. 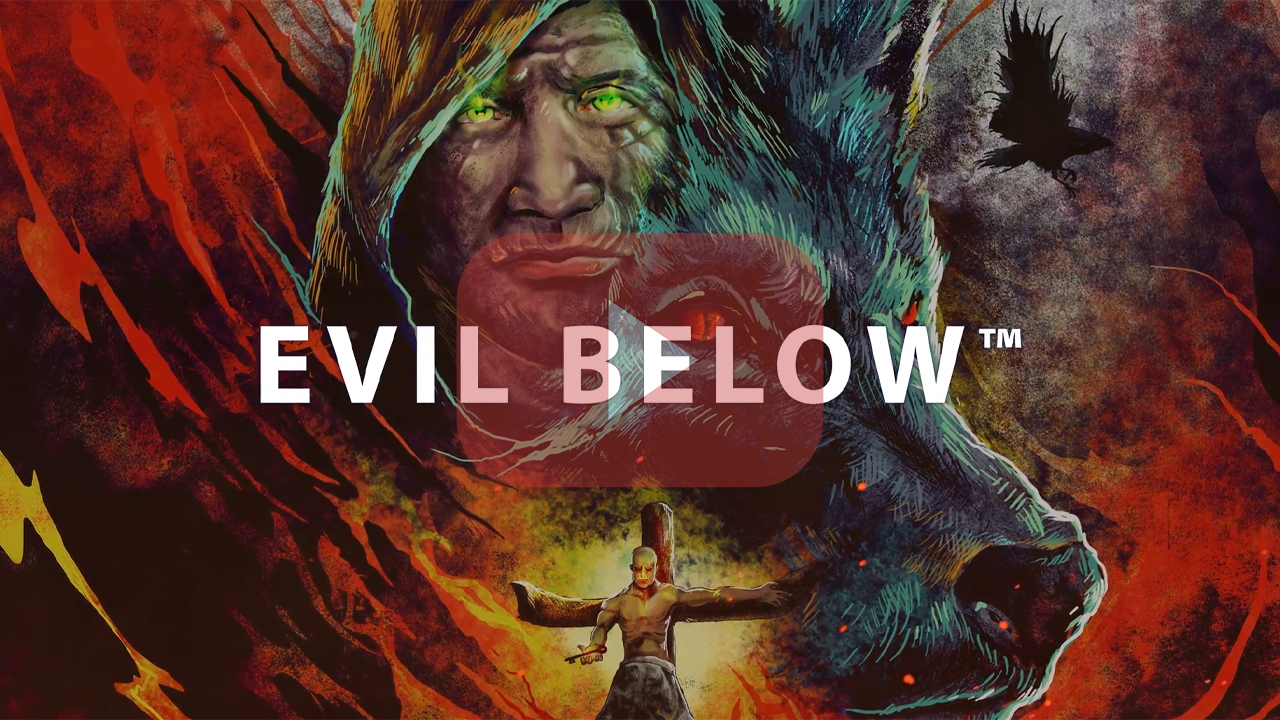 Evil Below (Fire Raven Studios)
A mysterious car accident on a lonely road leaves our protagonist and her child alone in the middle of nowhere. But after discovering the kid has been kidnapped by an evil cult, the woman will venture deep into the forest to find her lost child. But first, she must survive the horrors that dwell in this cursed place. Release date TBC.

And here's the list of the 8th edition of PlayStation Talents Awards finalists:

Also, remember that our latest PlayStation® Indies campaign is featuring some of these indie gems developed in Spain with the support of PlayStation® Talents. Now players can get these games, and many other incredible titles, at 80% off -- plus a special discount for PlayStation® Plus users -- for a limited time!

Comments:
Most Popular News
We celebrate All in! Games with a big Giveaway