1More has quickly made a name for themselves in the gaming audio department, making bigger brands nervous with their 50mm graphene drivers, high-quality sound, sweet lighting effects and comfortable design (we love their headband more than cupcakes). This version, the Spearhead VRX, even has Waves' Nx head tracking integration, which, if you are unfamiliar, is a Grammy award winning company that specializes in state-of-the-art audio DSP algorithms. All this is a wee bit technical, so here it is from the horse's mouth, in somewhat layman's terms:

"Even the slightest nudge to our head causes the complete audio scene to shift in the opposite direction. Our highly sensitive brain remembers where the sound used to be and where it is now relative to our head, and combines this with the movement of head to locate the static source of sound. Waves Nx simulates the effect of how our brain processes the acoustic space, the physical properties of the sound source, and our head orientation in order to create a sonically rich and fully authentic 3D audio experience that immerses yourself in a virtual audio reality."

The box the VRX comes in is up to the usual 1More standards; well-constructed, and frankly, kind of beautiful. It folds out to show the inner workings of the headphones, plus you can see the headphones through a plastic cover, just in case you're worried that you might just be buying a very expensive box.

Inside the box, you'll find the Spearhead VRX, a carrying bag, a micro USB cable, a 3.5mm audio cable, user guide, product guide and a sticker. You can use the 3.5mm cable on its own, but without using the USB connector to download the driver software, you can only use the mic and the bare-bones features (no EQ or Nx features), and you also can't mess with the lighting on the cups, mic or the base of the headband. And trust us, you are gonna want to mess with those lights, because when your friends walk in, they'll think you're being absorbed into TRON, which is pretty sweet.

The headphones themselves weigh in at 304 grams, so just a little over half a pound and they sit comfortably on the head for hours. The top strap of the cans is similar to the VR model, with a stainless steel split headband that works in conjunction with a flexible padded section coated in polyurethane leather (PU leather). Honestly, the padding here could be a bit better, but it still sits lightly on the head, so we didn't feel any discomfort, even after a few hours of play.

The padding on the ear cups themselves is very soft pleather, but that comes with a certain level of heat, and after almost two hours of gaming, we pulled them off and realized our ears were getting pretty warm. Not to make excuses, but two hours is about time to take a little break anyways, and we weren't exactly sweltering, so this wasn't a big con for us. Otherwise, the pleather is soft on the ears, and the auto adjusting headband makes these cans pretty darn comfortable overall.

The Spearhead VRX software is pretty straightforward: there are separate dials for mic volume, regular volume, vibration mode, a button for the mic's environmental noise cancellation, options for the Waves head-tracking detection, the EQ and light controls. There's also 8 preset equalizers and of course, you can always set up your own. It's intuitive, easy to use, and even Becky, the least tech savvy girl in the office was dialing in her own personal setup with ease.

You have to give 1More big props for making a headset that you can use to switch seamlessly between music and gaming. No matter what we were listening to, the bass rumbled but didn't fly off the rails, the highs were crisp, and the mids had a solid sound that stayed right where it should. The "vibration mode' is basically just an adjustable bass knob for making bass adjustments on the fly, although cranking it too high turns everything into a muddy, pounding mush, so it would behoove you to use a light touch here. This is a feature I really enjoyed for both music and for gaming; when stuff was getting intense, like walking into a boss arena, a couple small increases of bass put me right where I wanted to be. In short, with the EQ off, the cans still sound good, with the EQ enabled they sound amazing, but the real excitement comes with the Waves Nx technology.

Once you kick on the 3D sound, everything just kind of "opens up", for lack of a better word. You feel like you're in a well-soundproofed room with 360 speakers instead of cans on your head. Everything just sort of... moves back a little, but there's no appreciable sacrifice in sound. The sound profile and effects this creates is immediate and amazing. Bullets that are coming from your left will travel smoothly in front of you and to your right ear if you turn your head, and vice versa. It feels like you are actually moving around the room, not sitting in front of your monitor. Now, without using VR tech of some kind (Oculus or what have you), this feature isn't completely utilized, since I generally don't physically flinch away from attacks on screen, but in a game like, say, Dark Souls 3, where I am physically reacting to the stressful fights in front of me, the effect is simply awesome. Watching films like Dunkirk or the Matrix while using this technology is pretty insane as well.

For example, in Dark Souls 3, when a cathedral knight takes a big swing at me, and I physically jerk my head away and to the side, I can hear the blade cutting the air from in front of me to the side I'm physically turning my body too. When I roll to the left to avoid an overhead chop, I hear it begin to "whoosh" down in front of me and I hear the tail end of that "whoosh" to my right, accompanied by the visceral "clang!" of the blade hitting the ground to the right of me. It is pretty amazing, and you have to hear it to appreciate how high the level of immersion this creates. None of us in the office could detect any lag; the system seems to work immediately and flawlessly and it is very sensitive, with small movements registering right along with big ones. For example, I could easily notice the difference between glancing at a clock (quite close to the monitor) and reaching over to grab a drink of water. Using it with VR really took things to the next level, since these cans are 360 top to bottom; ducking, weaving, crouching, you name it, there was an auditory response. Now, if the VR scene would just, you know, get a lot better...

One minor gripe I had with this feature is that when using the EQ in conjunction with this, things got a little less clear. It's not deal-breaking by any means, but even when fiddling around with the EQ to try and bring back the richness I had when using just the EQ, I couldn't quite nab it. Ditto with listening to music; things just didn't seem as rich when using the Nx feature. This is an easy fix though, simply switching off the EQ and activating the Nx feature in some situations (music) and doing basically the opposite in others.

Now for the microphone. Unfortunately, while not awful, the mic is far from the best. One immediate "problem" is that the mic is of the pinhole variety. Now, you generally want the mic as close to your mouth as possible, which is why the LED stick baffles me. It looks like a mic. It slides down near my mouth like a mic should. It even pulses with color when you talk. So, I must ask, why is it not a mic? Voices come across as a bit muffled, there is no depth to it, and when using it, voice just sound flat, although to its credit, it does pick up speech well. You can still hear speech clearly enough that it doesn't affect gaming or calls, but for this price-point, having a serviceable, not stellar mic is a bummer.

The noise cancelling system (ENC) on the other hand, is pretty great. There are two microphones behind the cups that push back against environmental noise, cancelling it out. This feature does its job quite well, and background chatter and ambient noise is cut drastically. I tried this by using a loud desk fan and low music in the background, and we were quite happy with the amount of sound that it cut out vs having the ENC off.

The Spearhead VRX has some stellar features and great sound, with only a few minor problems and a weak microphone holding it back from being the go-to gaming headset. Still, the combination of the 3D head-tracking Waves Nx system, solid, easy to use software, comfort and the VRX's quality sound for both music and gaming makes this is yet another impressive entry in the gaming headphone market. 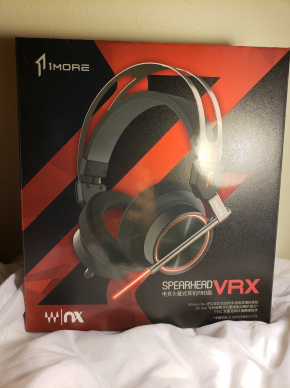