Wood Styles For Your Gear

Based out of Portland Oregon, there is a company called Toast, and they have built a business on cutting into wood with lasers, which sounds awesome in itself. They care about the environment, they are personable and helpful over email, and they had a weird idea that shouldn't really work, yet they've turned it into a business. But is their product any good? Will you want one?

Toast makes unique, personalized and stylized covers for your device, be it a PlayStation, Xbox, Switch or smart phone. Launched in January 2012, they met their financial goal despite only having 300 backers in their Kickstarter project, and used the money to buy their first laser.  Working out of a basement shop, they got Toast up and running, and they haven't looked back, crafting interesting, real wood covers that blend the natural with the synthetic. After hearing about this strange sounding company, we did a little research, and ordered a walnut colored wood cover for our office PS4 slim.

The cover arrived with minimal packaging, just a stiff envelope, which is part of their effort to minimize waste and their impact on the environment. I can appreciate this more than most, perhaps; while I love reviewing undamaged products, the amount of excess packaging we deal with is ridiculous. Our cardboard dumpster is constantly full, and we have more bags of packing peanuts than Amazon could use in a month, so it's nice to see a company cutting waste where they can. In fact, Toast only uses "responsibly grown, rainforest friendly wood and bamboo, they run on 100% renewable energy and their products are packed in FSC certified paper packaging." The hand written note of thanks included in the envelope was a nice touch as well, and you can tell this is a small company run by people who are into what they do.

As you can see, the actual cover is not comprised of much in terms of "stuff"; it's a few pieces of laser cut wood with some adhesive backing and an alcohol swab. The backing was easy to peel off, especially since the product's are made with real wood, which bends easily to get a corner edge of the sticky backing paper up. Once you peel it, it's a simple matter of sticking the pieces where they go, and it's easy to figure out what goes where, especially with small "micro-cuts" where the wood cover needs to bend around the corners of the PlayStation. In fact, from a purely tactile point of view, putting the cover on was surprisingly pleasing, kind of like working with a wood/plastic hybrid due to how it bends around corners. I had the entire thing installed in under ten minutes, including the time it took to open and use the enclosed alcohol wipe prior to applying the cover.

A product like this is somewhat difficult to review; you either like how it looks, or you don't. Personally, I like it quite a bit. The people at Toast custom lasered "dlh.net" into the top, and it looks great. The pictures above and below don't quite do the logo justice, but we tried; basically, depending on the angle you're looking at it, different parts of the logo show up and fade, for a very cool effect. Sometimes the whole thing looks dark, other times the background of the logo appears somewhat faded, making the "d" stand out. The whole thing looks great and the classy wood has a very professional appearance to it; I kind of wanted to affix a briefcase handle to my PlayStation and walk around downtown wearing a suit and talking about "mergers" and "numbers".

If you like the look of wood, you can't go wrong here. Whether you are looking for a cover for your phone or gaming system, Toast makes a reasonably priced, attractive product. The end result looks classy, and you can get Toast to burn whatever logo or phrase into the cover you'd like. 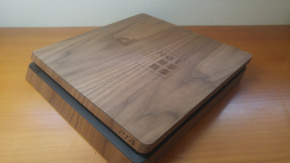